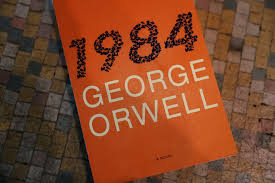 Literature is said to be the mirror of life since it reflects the human actions, states emotions, imaginations, and everything that is part of one’s life. Since time immemorial, literature has been a major form of entertainment and joy for people in one way or another. It gives aesthetic pleasure when it is read and heals the aching souls.

However, not all pieces of literature are worth spending time on, nor all of them give aesthetic pleasure to the soul. Only those which have withstood the taste of time and proven their worth in every age are worth reading and George Orwell’s 1984 is one of them.

The novel 1984 is a dystopian story based on a fictitious theme. It is a story of a party that gains control of a superstate called Oceania. After coming to power through revolution, the party oppresses and persecutes the people in a way that would even be foreign to Nazi Germany and Soviet Russia. The party interferes in the private lives of people, watches them, listens to them and observes their all activities through a telescreen which is present in every house, in public places and all offices. It, further, keeps the people under constant fear of war which it is supposedly fighting with one of the other two superstates called Eurasia and Eastasia and kills the basic emotions of people to an extent that they do not feel any love or loyalty, save for party, and anger only for the enemies of the state.

A man named Winston Smith, who is the main character in the story, rebels against the party by not accepting their doctrines and secretly carrying out activities which are otherwise forbidden by the state. He embarks on a journey of love, rebellion and tactical manoeuvre to somehow change the circumstances and make people free from the clutches of oppressive rule.

Hence, 1984 has all that which a reader craves for. It is truly staggering, appealing, engrossing, suspenseful, and captivates the interest of reader till the very end. Anyone who likes to read and is looking for a good piece of literature can surely consider this masterpiece. Following are some worth-mentioning quotations from the book.

“In moments of crisis, one is never fighting against an external enemy, but always against one’s own body.”

“Orthodoxy means not thinking–not needing to think. Orthodoxy is unconsciousness.”

“Power is in tearing human minds to pieces and putting them together again in new shapes of your own choosing.”