73 Years of Brutality: The Sorry Plight of Kashmir 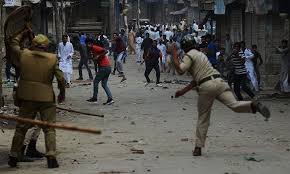 It was 73 years ago, on January 5, 1949, that United Nations guaranteed Kashmiri people their right to self-determination through a fair and impartial plebiscite. However, it has been 73 years of tyranny, oppression, persecution, barbarism, brutality, killings, suppressions and detentions. The People of Kashmir, still today, suffering from all sorts of subjugation, look up to the international community and the so-called human rights institutions to deliver on their forgotten commitment.

Disputed between the two nuclear-armed countries of Pakistan and India, the strings of Kashmir have been pulled by both the sides with no consequential result. It has had periods of instability since the partition of sub-continent. However, people on the western side of the line of control (LoC), enjoy far better rights than those on the eastern side. The former enjoy the special status as per the United Nation resolutions, whereas the latter have been stripped of this internationally-recognized inalienable right and subjected to all form of tortures.

The situation was made worse when the extremist and fascist government of BJP in New Delhi revoked the articles 360 and 35(A) of Indian Constitution which granted Kashmiris the special status. Since then, apart from all tortures, there has been curfew and communication-blackout. A lot of Kashmiris have lost their lives while those who somehow raise voice against these brutalities are captured, put into detention and left to die. The plight is manifested by the detention of Asia Andrabi, Fehmida Sufi, Naheeda Nasreen, Dr Ashiq Hussain Faktoo, Syed Ali Gilani and many others who have been put behind the bars for raising their voices.

Amidst all these grave atrocities, the international community keeps on the sealed lips. For those who call themselves champions of human rights, freedom and liberty, the national interests seem to be more appealing than any of these. Pakistan has highlighted the issue on different occasions and asked the international institutions to heed upon the violations, but they are too negligent to take any concrete action.

Nevertheless, Pakistan has once again asked the countries to pay attention to the grave issue and not to renege upon the commitment which the people of Kashmir were promised 73 years ago. “We call on the international community to take action against the well-documented human rights violations being committed with impunity by Indian Occupation forces against innocent Kashmiri men, women and children; and to ensure Kashmiris get their right to self-determination.”, twitted the premier, Imran Khan.

Therefore, the international community must rise to the occasion and secure the fundamental rights of Kashmiris and let them decide their future through a fair and impartial plebiscite