A mandir restored after 74 years, was closed since partition! 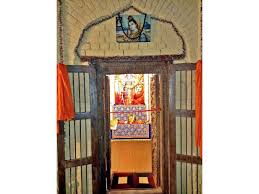 Rawalpindi was once home for majority of Hindus and Sikhs before partition, this mandir was made in 1930 by two hindus namely Moti Ram and Asa Anand near Moti Ram Dawakhana in Purana Qila. After the partition, local Muslims took possession of the temple building and used it as a house. During Babri Masjid’s demolition, the temple came under attack of fundamentalists and was severely damaged. Currently Rawalpindi is a home to 1800 hindus, in past Krishna temple was closed and then renovated.
Closed since the partition in 1947, the Purana Qila Mata Mandir in Rawalpindi, Pakistan, was inaugurated on thursday 25, march. After the Evacuee Trust Property Board (ETPB) got it evicted from its unauthorized occupants and carried out repair work before handing it over to the local Hindu community even as there has been a rise in the cases of oppression of the minority community in the Islamic nation in the recent past.
Faraz Abbas, an official of ETPB informed that the temple had been closed since the partition.
“We got its possession a few days back and began the restoration work since the temple building was in shambles and was crumbling down but now it has become a functional temple“.
He further said;
“We have got the steps of the temple constructed, fixed the fencing and other repairs work and whitewashing in the first phase and the rest of the work would be completed in the second phase”.
The religious site was then handed to local Hindu community. Hindu leader Om Prakash said that the Hindu community of Rawalpindi was extremely happy with the restoration of the historic temple. He said that the community members would now perform all religious rites with complete freedom.
Sources: Temple bells ring after 74 years in Rawalpindi

Great! We are never alike …they should learn from us

Right!! But we also miss some spaces😐

Religious harmony is all we need❤️