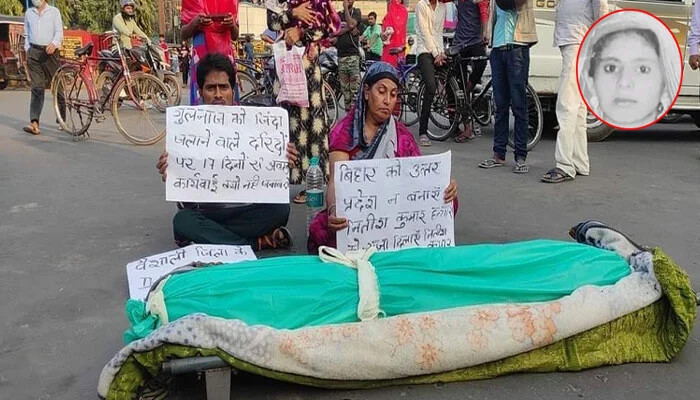 In India, a Muslim girl was burnt alive for refusing to marry a Hindu boy.

According to Indian media, the inhumane incident took place in Vishal district of Bihar state where a 20-year-old girl was set on fire by three Hindu youths by spraying kerosene.

According to the report, 20-year-old Gulnaz was being harassed by a young man named Satish for several months and was insisting on getting married.

The fire badly burned 75 percent of Gulnaz’s body and she died of her injuries 15 days later in hospital.

In her video statement before her death, Gulnaz said that Satish had been harassing her for several days and one day she made it clear that she is a Muslim and could not marry him. After which, when she went out to throw garbage, Satish along with 2 others sprayed kerosene on her and set her on fire.

After Gulnaz’s death, her family staged a sit-in with the deceased to demand justice, whose pictures have gone viral on social media, and the Indian government is being asked to provide justice to Gulnaz and punish the perpetrators severely. ۔

According to the report, Gulnaz’s father had passed away a few years ago and Gulnaz’s mother sews for household expenses in which Gulnaz also used to help her.

Users on social media have criticized the Modi government, saying that because the girl was a Muslim and the boy was a Hindu, it was not a case of ‘love jihad’, while some said that the accused belonged to influential families. That is why the police are showing leniency.