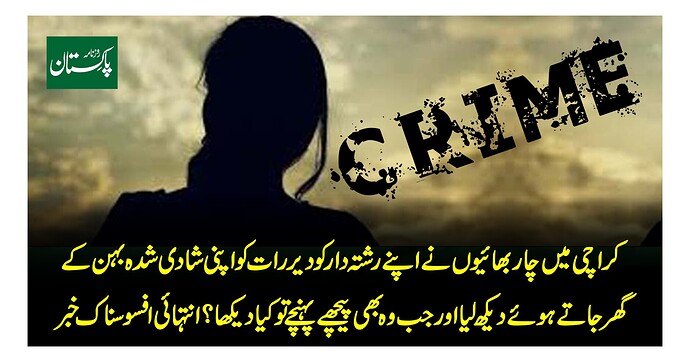 Karachi (March 18, 2021) The decapitated bodies of a man and a woman were found from a house in Khairabad area of ​​Manghopir.
Police from the concerned police station reached the spot and the bodies were shifted to the hospital.
The victim(Young man) was identified as 30-year-old Mukhtar Ali, while the victim (woman) was identified as 28-year-old Dar Bibi.

Mukhtar Ali’s younger brothers told the media that they belong to Larkana and they are four brothers. The victim, Mukhtar Ali, is the second brother.
He worked as a caterer. He was unmarried. . While the Dar Bibi was her cousin and she was married, her husband’s name is Abdul Rauf, who is living in Saudi Arabia for work.

Police say the incident was killed in the name of honor.
The woman and the man were brutally slaughtered in a room of the house.
Mukhtar Ali demonstrated a lot of courage, in the injured condition,(گلا کٹی ہوئی حالت) reached his home (which was more than 500 meters away from it) and reported to her mother.

It has been confirmed that, the victims was killed by Dar Bibi’s brother۔
However, it has not yet been confirmed which brother committed the murder. Because the woman has three brothers, and all three brothers have escaped since the incident۔
The wives of the three accused were taken into police custody for questioning. they told the police that Mukhtar Ali had gone to meet to Dar Bibi at her house at night. When Dar Bibi’s brothers found out about it, they reached there.
The young man shook hands with the accused and tried to flee.
But he was killed with a sharp instrument.

Our government must take strong action against them.