About the Politics category

Horse Trading at it peak in Pakistan

When we go through Pakistan’s political history, it is easy to familiarize with the concept of horse treading, which is retreated in every election. Despite knowing about this unethical and contemptuous practice, all the major stakeholders are just enjoying this scenes as an spectators. No one in Pakistan’s political history go for it’s permanent solution and ensure transparency in electoral process with the help of electoral reforms by taking all the major stakeholders on board. Lack of free and fair election process is the major reason of uncertainty and political instability in the country. To get rid of this disgusting and shameful deed; electoral reforms in wide spectrum became inevitable today.

PML-N leader Malik Saiful Mulook Khokhar gave a surety bond to Maryam Nawaz. During her appearance at the high court, she was accompanied by Captain Retired Safdar and Marriyum Aurangzeb.

The LHC office accepted the surety bond of Maryam Nawaz. Before departing from the high court, she interacted with journalists and said that she was happy that a clear line has been drawn and a political alignment was made.

However, she did not mention Pakistan People’s Party (PPP) in her statement after serious differences emerged between PML-N and PPP following the election of Yousaf Raza Gilani as the [opposition leader in the Senate](https://arynews.tv/en/yousaf-raza-gilla She slammed PPP without taking its name, saying that some people are struggling for the supremacy of the Constitution and law on one side, on the other hand, democratic norms and narrative were violated to get a ‘lower post’.

“For the first time, we have witnessed that an opposition leader is being elected by the government members. The real opposition is PML-N, JUI-F and other parties as they are taking a stand on the matters of principle.”

She added that they believe in democratic principles and not among those leaving the field after striking a deal.

She was of the view that PML-N Supreme Leader Mian Nawaz Sharif has directed her and all other party leaders not to compromise on the basic principles and the party’s principled stance against the incumbent government.ni-senate-opposition-leader/).

Taking to Twitter, Faisal Javed Khan announced that the prime minister would be interacting with the public and answering their questions on April 04 (Sunday). 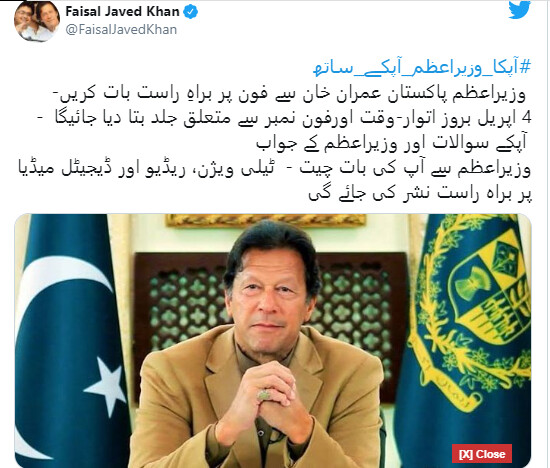 “Your Questions and prime minister’s answers,” he said in his tweet while elaborating that the timings and the numbers would be shared soon. He said that the conversation with the prime minister would be broadcasted live on television, radio, and digital media.

This is not the first time that Prime Minister Imran Khan would be interacting with the public on the telephone as on February 01, Imran Khan took calls from the general public and responded to their queries.

During the conversation, Imran Khan shared that a housing project has been initiated by the federal government under which Rs300,000 subsidy would be given to 100,000 housing units.
Read More: PM Imran announces subsidy on federal housing project in telephone calls with public

He said that a law needed for loans on housing projects was in pipeline due to some legal framework, however, it is now cleared and banks would provide loans for the construction of houses.

“I personally met with the heads of the banks and took measures needed for issuing loans for the housing sector,” Imran Khan said while responding to queries of the masses via telephone.

Inflation may stay high due to lack of cooperation between Centre, provinces 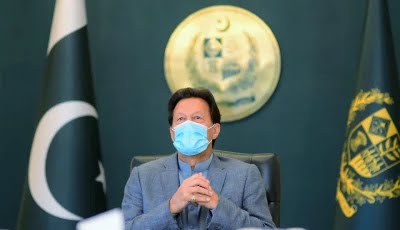 The price of wheat flour has surged by 30% during nearly 33 months of the Pakistan Tehreek-e-Insaf (PTI) government – from August 2018 to April 2021. And, this is no guesstimate. It’s official.

According to the Pakistan Bureau of Statistics (PBS), a 10kg bag of wheat flour was selling for Rs385.60 back in August 2018. If someone wanted to buy two bags, all he had to spend was Rs771.20. Now, PBS says during the week ended April 29, a 20kg bag of wheat flour was available at a national average of Rs997.76. Why on earth they don’t give the price of 10kg bag, which is known only to them.

May be they don’t want us to compare the prices prevailing in August 2018 and now. No problem. Even a fourth-grader can do this math.

Divide it by Rs771.20 and multiply by 100, you get the percentage increase in the price, which is 29.8% or 30% when rounded off. This is just one handy example of how prices of most common food items have risen during the PTI government.

Sugar is another example. But leave that aside. Most Pakistanis should, and can, cut down on it to avoid diabetes. However, no one can, and should, cut down on wheat flour consumption except those explicitly told to do so by their doctors.

Let’s now see why prices of most food items went up during the maiden government of PTI or in other words why food inflation remained so high? And, why the party failed in containing food inflation that it knew well would erode its political capital like nothing else?

In FY20, food inflation was at 13.6% and 15.9% for urban and rural consumers respectively and in April 2021 it stood at 15.7% and 14.1%, according to the PBS. In fact, the PTI had built castles in the air about fulfilling its electoral promises. Or, it seems now when it was being voted to power, people had pinned high hopes on it and had seen in it the panacea for all socio-politico-economic ills of Pakistan.

Prime Minister Imran Khan had apparently not realised before being elected that some of his slogans like freeing up Pakistan from the corrupt elite, fostering economic growth and reducing the country’s dependence on foreign loans need hard work by a team of economic experts of his own choice. When he came to power, he faced some crude reality checks. First, he learnt from experience that the powerful establishment would not support him beyond a certain limit. 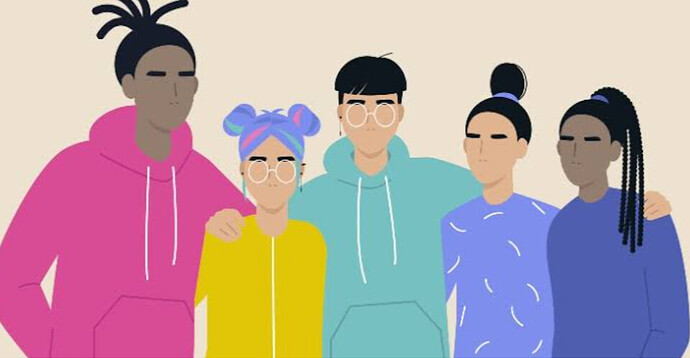 20210521_231903960×499 64.8 KB
“Significant youth support includes perceiving and sustaining the qualities, interests, and capacities of youngsters through the arrangement of genuine freedoms for youth to get associated with choices that influence them at individual and foundational levels.”

The profoundly persuasive and pivotal requirements for youth presence in Pakistani political framework, the part of youth ought to be formalized. The institutional political cycle ought to be returned to, to give a fairness of cooperation and authority for youth… The current political administration ought to be stirred up and most extreme measures ought to be taken to diminish and wipe out the disappointment of youngsters in the public political arrangement of Pakistan.

“As there are numerous kinds of formative cycles, societies and novel people on the planet, cooperation isn’t any one wonder. There are different meanings of cooperation. An essential idea of interest nonetheless, is that individuals are allowed to include themselves in friendly and formative cycles and that self-inclusion is dynamic, deliberate, and educated.”

How can i be the part of it 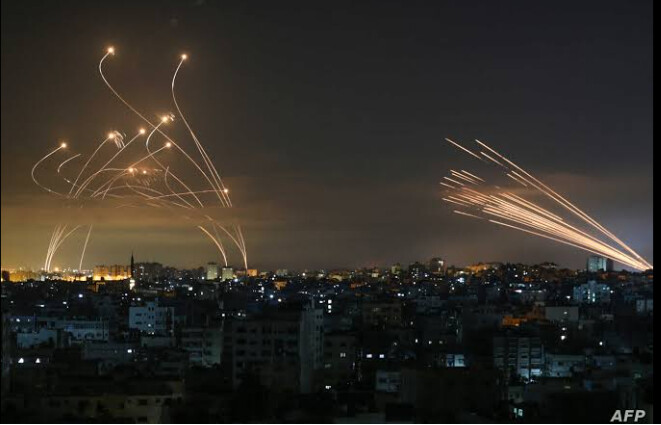 Both Israel and the Palestinian aggressor bunch Hamas have asserted triumph, after a concurred truce hung on Friday
The ceasefire confronted an early test when new conflicts broke out at the al-Aqsa mosque in involved East Jerusalem
The contention saw 11 evenings of cross-line bombardments and in excess of 250 passings
Hamas political pioneer Ismail Haniya says the threats were a quantum jump for Gaza
Israel said it had essentially debased the tactical abilities of Hamas
The truce was facilitated by Egypt. The US said it had affirmations that it would hold