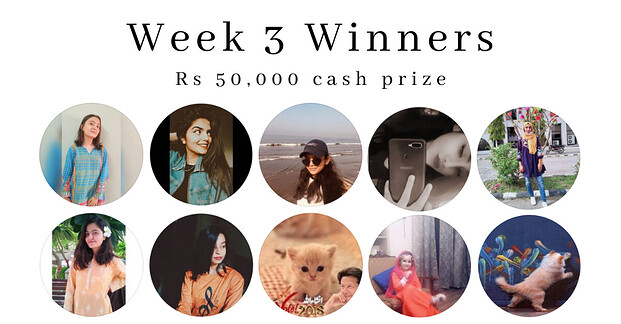 Please join us in congratulating our Week 3 winners. All week 3 winners are first-time winners however, it doesn’t mean that you cannot win the prize a second time. This time we had a reasonable competition and where we had a tie we selected the first-timers.

We congratulate our winners and thank everyone who participated.

[pexels-pixabay-47344] When you are a student, life is at its best; all you have to do is study hard and enjoy life to the fullest—nothing major concerns you except getting good grades. But a little downside you feel as a student is not having enough money to spend on yourself. Whether it’s about outings with friends, getting your favorite mobile phone, or spending on some genuine needs. Mostly, we become financially secure after securing our first job. But what about the concerns we face befor…

[Aamir-Liaquat-500x400] Amir Liaquat Hussain who is a renowned Pakistani Islamic scholar and is also famous for his Ramzan transmissions has sparked some serious criticism on Twitter. Today on (March 18, 2021) 4;32 PM he has tweeted that : “PPP (Pakistan’s People Party) can overthrow the Government only if Bilawal Bhutto tear his clothes and accuse Shaikh Rasheed of Molestation/Rape”. [amirfinal] Here’s the original Tweet : It seems like Amir Liaquat is a member of some really cheap …

[image] Following a verbal quarrel over a minor parking dispute, Ibrahim Durrani violently attacked Fashion designer Mohammad Moazzam Khan and his two sons with a small Swiss Army knife that was attached to his car keys in the limits of Pakistan Air Force (PAF) Falcon Complex Karachi on March 16, 2021. Attacker fled the scene and remains at large. Graphic videos doing rounds on social media show Durrani hurling threats at both victims as while a security guard attempts to diffuse the situati…

[image] The charming singer Atif Aslam is well celebrated in Pakistan as well as enjoys an insane fan following in India also. In fact, the vast majority of the hit tunes of Atif Aslam were part of Indian films. When we talk about some extensively hit songs of Atif Aslam “Pehli Nazar Mein” comes back to us all the way from our memory lane. Those who don’t know “Pehli Nazar Mein” was a super-duper hit song of Bollywood movie Race which was released in 2008. Since the craze of old songs can nev…

[freestocks-11SgH7U6TmI-unsplash-900x600] Watching movies and TV shows is an incredible way to spend quality time alone, especially when you are binging it on Netflix, which is the most popular application across the world. In the past years, there has been a huge influx of freeloaders, those who get account passwords from their friends but never themselves pay for the subscription. For this reason, Netflix has now created a new feature which will allow them to crack down password sharing bet…

The world’s first space hotel, called Voyager Station, is set to open to guests in 2027, transforming space travel from science fiction to reality. [space4] The Voyager Station will be a rotating space station that can generate various levels of artificial gravity by adjusting the rotational rate. The station is built to serve industry, manufacturing, national space agencies conducting low-gravity studies, and space tourists who want to explore the new frontier in the comfort of low gravity …

Pakistani films that are worth the watch! Showbiz

Parwaaz Hai Junoon This film, was released in 2018. It stars Ahad Raza Mir, Hania Amir and Hamza Ali Abbasi. Parwaaz Hai Junoon is one of the few good Pakistani films that I have thoroughly enjoyed watching. It is filled with drama, comedy, romance, and even action! PHJ is a great watch for all genders, and age groups. It revolves around Sania (Hania Amir) who joins the army in the remembrance of her late boyfriend (Hamza Ali Abbasi). There, she meets new people, and invests herself in serving…

The technology is getting more intense and ground-breaking with every passing minute. Science after discoveries of thousands of undiscovered truths and inventions of limitless objects has now taken a step forward. We are heading towards making our copies. That are apparently of great benefits to human life but every technology comes with a buy-one-get-one scheme. So we will MUST have to pay a lot to gain advantages. Reference: BCC news (5 hours ago) Source: youtube ['Attractive' robot…

Thank you so much😍 I’m really happy to be a first time winner… Congratulations to all the winners. Looking forward to more amazing competitions👍

Congratulations abound. But I’m seeing 10 winners here, wasn’t it going to be top three with 1st getting Rs. 15k. I’m a bit confused. Did I read the rules wrong?

Our week 1 had 30K cash prize for top 3, then we changed it to 50K for top 10 so that prize money gets distributed in more people.

Almost all of them are girls & new faces here.
Anyways, Congrats to all!

Makes sense. Though it significantly reduces the prize money for top contributers, providing weakened incentive for participation. But, who am I to say? Your site, your rules. Thanks for clarification.

I don’t understand how some topics that won were tie but again: Their site their rules

Now that you say it, I wonder maybe they don’t know I’m a girl

You are part of the community and we welcome all perspectives! Thanks for sharing your thoughts. We have experimented with different incentive models and this one seems to be working the best. Though we are brainstorming other options too.

Put a girl profile picture to win next time

Admin bro don’t get offended we are just kidding

how can the results be biased. Rishtedar thori hain frontpage winners k😂

No. I just think they wanted to encourage the new people so they favored them. Girls write more often then boys but all girls seems ridiculous

@Zainab_Sajid …i cant get it…what exactly discriminates the topics…what is there is an evaluation statement under each one too!?