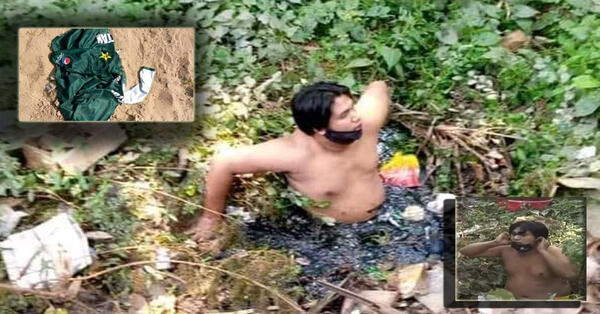 Second new outrageous incident of extreme intolerance has transpired in ongoing Bangladesh-Pakistan series after a fan was forcefully made to take off Pakistani jersey and put it under his feet earlier during T20 international matches. This time a distressing episode, pretty same in nature happened in test series, albeit with much worse punishment.

On November 26th, first test match’s eve, a young man who had come to Chittagong stadium wearing Pakistani team’s cricket shirt was stopped outside venue. People involved in stopping him were members of jingoistic sociopolitical Bangladeshi organisation called Muktijudhho Mancha, fan was stripped of his Pakistani kit and given a chase once he ran away from scene getting frightened he may be harmed.

Whilst sprinting away, he accidentally fell into an open gutter filled with sewage on the side of the road. Standing in ditch, covered waist-deep in human excrement, he sought forgiveness from oragnisation’s activists holding his earlobes with both hands, guaranteeing the leadership he wouldn’t make same mistake again, upon which he was let go.

Muktijudhho Mancha have issued a statement announcing any Bangladeshi citizen carrying a Pakistani flag or wearing their shirt won’t be allowed into stadium and shall be dealt with accordingly. Fans showing support to Pakistan are traitors, from the lineage of Razakars (East Pakistani paramilitary force which assisted present-day Pakistan in 1971 war), genocide committers don’t deserve our backing, they wronged us.