Do you know who was Akbar Bugti in the time of Musharraf?
Nawab Akbar Shahbaz Khan Bugti was the head of the Bugti tribe of Baloch people who served as the Minister of State for interior . 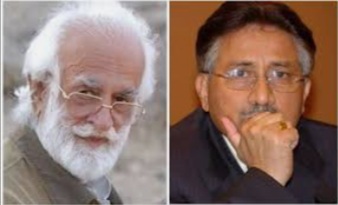 The court acquitted former provincial home minister Mir Shoaib Nosherwani and Qaumi Watan party (QWP) chief of National Assembly Aftab Ahmed Khan Sherpo.
After the announcement of the decision by ATC Judge Jan Muhammad Gohar, the lawyer representing Jamil Bugti,Sohail Rajput announced his decision to challenge the judgement of the court.
“We are not satisfied with this judgement and we will challenge it” Rajput told reporters outside court.
Sherpo expressed satisfaction over the judgement and said justice was upheld by the court .
The ATC court, noticing the absence of other co-accused , issued permanent arrest warrants for former premier Shaukat Aziz, former governer of Balochistan Owais Ahmed Ghani and former DCO Dera Bugti Samad Lasi for not appearing before the court despite repeated notices pertaining to Bugti murder case. 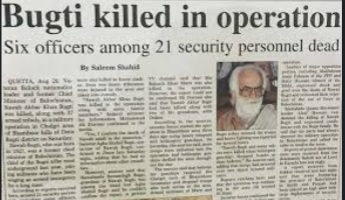 An FIR was registered under sections 302 and 304 of the Pakistan Penal Code against Musharraf and other in 2009 for their alleged involvement in Bugti’s murder.
Musharraf was also on bail in other major cases linked to his time in power including the 2007 assassination of Benazir Bhutto , Lal Masjid and judges detention case.
Baloch leader Nawab Akbar Bugti was killed in an operation in Balochistan’s rugged mountains of Taratani in Kohlu district on August 26, 2006.
Bugti had led an armed campaign to press for provincial autonomy and a greater share of profits from Balochistan’s natural resources.
The death of the Baloch chieftain had sparked angry protests in parts of the country.

Keep up the good work.

Akbar Bugti what a man he was. Not afraid of anyone true admirer of Mr. Jinnah. Man who stood against whole country army to get a raped girl justice. Sylvia Matheson wrote in her book that he had such a personality that no powerful British woman couldn’t stand near her.