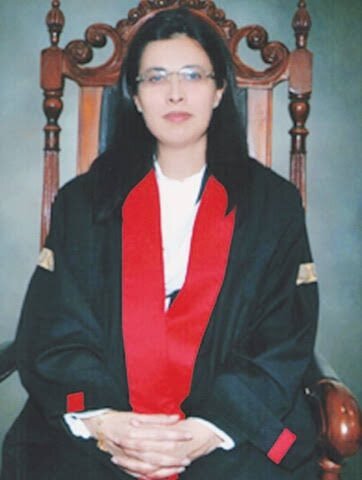 Internet users all across the country have expressed their joy at the nomination of Justice Ayesha Malik as the Judge of the Supreme Court of Pakistan; the first woman ever to take the position. She has been nominated for the post by the Chief Justice of Pakistan and will ascend to the Supreme Court on the 9th of September upon the meeting of the Judicial Commission of Pakistan. After the ascension she is to hold the position until March 2031

The news was received well by the general public, with the majority of the twitter audience, especially women, rejoicing at the appointment.

Justice Ayesha Malik, a woman in Supreme Court ; another glass ceiling being broken. Many more to go. pic.twitter.com/F58VPHwsSY

Ayesha Malik has a noteworthy reputation, having worked pro bono for NGOs for multiple programs including poverty alleviation, microfinancing and skill training. She has also authored various publications as well as acted as a reporter for Pakistan in the Oxford Reports on the International Law in the Domestic Courts, which is a publication of the Oxford University Press. She was also the judge who gave the revolutionary judgement on the abolishment of the 2-finger test for sexual assault survivors in Punjab.

Another glass ceiling shattered, Justice #AyeshaMalik to be appointed as the first female judge of #SupremeCourt of #Pakistan. Lest we forget she gave the historic judgement of abolishing the practice of two finger-test for victims of #sexualabuse in #Punjab. pic.twitter.com/B4qiXNxzYb

Being the first female judge in the Supreme Court in the 74 years of the country’s existence, Ayesha Malik is surely a woman to be celebrated!