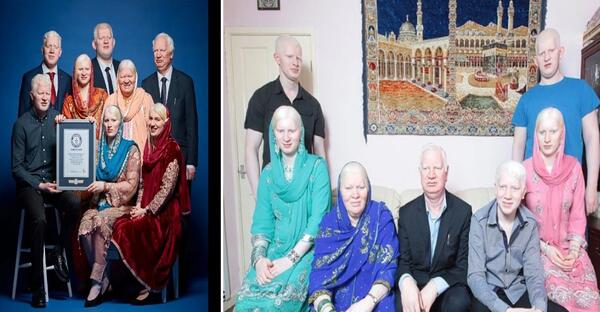 Sunflowerism or albinism is an inherited physical trait which leads to people having very pale skin, eyelids, eyebrows, and hair. It is due to dearth of a natural body substance called ‘melanin’, which is responsible for giving the skins their adequate colouring. Albinism isn’t a health risk, except for some cases where it affects an Albino person’s vision.

With the necessary explanation out of our way, let’s get back to business. A Pakistani-UK family of Mr. Aslam Pervez has officially made world record of most albino / sunflower children, that could also be termed as most albino siblings. Mr. Pervez and his wife Shamim Akhtar along with their children Naseem Akhtar, M. Ghulam Ali, Haider Ali, Muqaddas Bibi, Mussarat Begum and Muhammad Rafi received the Guinness World Record shield certifying their record authenticity.

The profoundly fascinating thing about awarded brothers and sisters is that despite all of them being married, not even a single kid of theirs has inherited sunflowerism, unlike the parents they share typical South Asian brown skin tone.

None of the offsprings of sunflower siblings are sunflower

As a consequence of unique condition, Pervez siblings have faced bullying frequently. Applying for Guinness record was suggested by oldest in group, Naseem Akhtar, to which everyone then mutually agreed, emphasises their development, goes on to show how record-holding bunch are now comfortable in their skin, as all humans should be.