"Chaos in the middle of summer" - feeling ignored, the Pakistani GenZ films own drama series 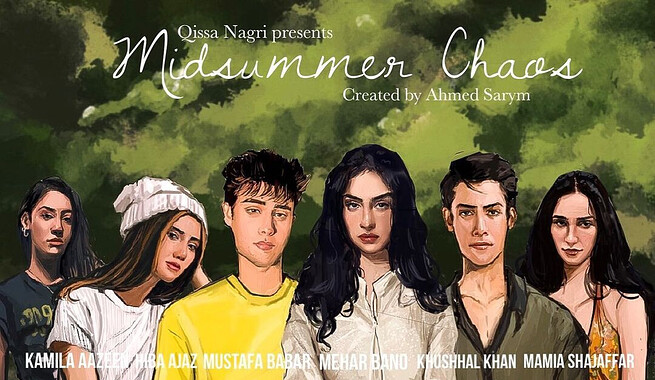 Daytime parties for the sake of sleeping too early at night, hyper anglicized accents with a desi undertone, an abundance of wealth, and privilege blindness. These are some stereotypical characteristics the general public tends to associate with a certain group of post-millennial youth of Islamabad, often informally referred to as ‘burgers’. Midsummer chaos features a group of characters who embody these stereotypes flawlessly. A group of Islamabad-based teenagers recently came out with this web series which took the country’s young demographic by storm. The first episode, spanning around 15 minutes, has so far acquired over 260K views since its premiere on June 12th.

The series incited a variety of responses, predominantly mocks and criticism from the general audience which claimed the series to be ‘unrelatable’, ‘lacking depth’ and the actors to be having “poor acting skills”.

On the other hand, it received encouraging responses as well, with people lauding the series for bringing a fresh new genre to the Pakistani media industry that is away from the traditional household politics to something centering more on the teenage demographic.
Actress Ushna Shah responded to the critics, saying that the series was created by a teenager, for teenagers, inspired by the world he grew up in and that he should be applauded for pursuing his dreams at this tender age. Besides, the show is only 3 episodes though, and much of the storyline is yet to unfold.

The premature criticism is primarily rooted in the fact that the first episode of the series was hyped and promoted way too seriously, only for the directors to come out with an under 15 minute, chaotic (pun intended) pilot. It featured a too-gullible-for-his-own-good teenager with a failing relationship, a toxic best friend who abandons him following a drunk rampage at a pool party, some side characters without noteworthy contribution to the storyline, and finally, an abstract character in the end who the protagonist turns to for advice.

The later episodes uncover other elements of the storyline, which are rather abruptly introduced but fit in nonetheless. Some prominent subplots include that of Alayna, who is figuring out her identity, depicted by a change in appearance and behavior, and a corny dialogue at a cafe in Islamabad that featured her breaking up with her long-term boyfriend and the protagonist of the show, Haris. The third episode features Haris’ parents and their turbulent marriage starring Fawad Jalal and Arjumand Rahim, two mature actors who looked pretty out of place in the show featuring adolescents. We also get an insight into the life of Ushna, a young girl leading somewhat of a double life being a party girl outdoors and getting a quick change of attire before entering her house.

Probably the best thing to come out of the series was the memes. Count on the Pakistani community to make the most out of anything, even a rather underwhelming web series. A large part of the viewership attests to watching the show just to keep up with the memes and honestly, the series just works well enough as an ironically comedic coming-of-age sitcom. The comment section of each episode is full of gags and trolls which make a visit to the link worthwhile.

It must be admitted though, that the show is doing a pretty good job considering it is made by a group of teenagers working pretty much independently. The first impression left by the show’s pilot wasn’t exactly the best, has prompted a lot of mockeries, and that very impression went on to make viewers make fun of it just for the sake of it even as the storyline gets progressively better. It’s just more convenient for a faction of critics to stick to their opinion and develop it on the same lines than to acknowledge an opposing idea, plus internet trolling culture is a recreation within itself. When it comes to relatability, it may not be easy to culturally identify with, but the viewership is the same demographic which would spend hours binging Euphoria and Gossip Girl on Netflix, and let’s be honest those are not relatable in the slightest.

The script, however, is admittedly repetitive (Haris just can’t seem to figure out yeh sab kya ho raha hai, and makes it a point to let it be known at various points throughout the series), and yet all over the place at the same time. The cast’s acting skills seem to have room for growth, but then again much of the cast had to be abruptly changed following the original cast’s differences of opinion with the storyline. Other than that, it does have the viewership hooked and did quite some numbers even as an amateur production, even if for the sake of the memes. Let’s see what the show has in store for the audience in the future!

After reading this, I went to watch the series but couldn’t watch more than 5 minutes of it. If these people in the series represent Pakistani GenZ, then inn ka Allah he hafiz hae. These wannabe angraz ke ulladaen, desi accent may angrazi boolnay walay, kud ko ziyda modern samjtay haen. Baycharay ehsasay kamtari kay marray angraz bhana cahtay haen, megar angraz say ziyda baboon lgtay haen. In fact the very word “baboo” came from “baboon”. Back in British India days, when desis used to try to become like angraz, angraz used to call them “baboon”. Desis would hear it as “baboo” and used to take it as a complement. Inn ke bhe yehi halat hae.

This series is a non-stop cringefest. What is this wannabe whites behaviour? Why must we imitate others to produce something good? We have our own identity, our heritage. Why not utilise it instead? This way audiences would also relate, which means more eyes on product.