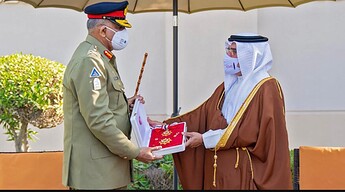 IMG_20210108_1505001080×604 175 KB
The Cheif of Army Staff General Qamar Javed Bajwa received the top military award from the
Crown Prince Salman bin Hamad bin Isa Al Khalifa of Bahrain.
The COAS is currently in Bahrain. Whilst in a meeting with the prince matters of defense, mutual interests and security, and regional cooperation were discussed.
The inter public service relation stated that
“Bahraini leadership reaffirmed their special association with Pakistan and also vowed to keep working for even promising relations between the two fraternal countries.”
The army chief has been presented with an award acknowledging his contributions to the defense sector. Several officials from both Pakistan and Bahrain attended the meeting.
They also witnessed the closing ceremony of the Pak-Bahrain military exercise AL-BADAR-V at Sakhir Camp. The Prince admired the standard of training and the results attained. COAS said that the exercise symbolizes the mutual efforts of both nations against terrorism.