Prison education is means of rehabilitating, revolutionizing and redirecting. If you release someone with the same skills with which they came in, they are going to get involved in the same activities as they did before. Lack of education and opportunities contribute to high level of crimes.
Education can be a gateway to social and economic mobility. This vital opportunity, however, is currently being denied to a significant portion of the more than 10.35 million individuals currently incarcerated in the prisons of whole world. Prison education is a key to reduce crime as well as a rostrum for prisoners to a good future ahead.

The act of being isolated for almost 18 hours of a day in a single cell usually give birth to the aggressive and criminal thoughts. If not isolated in a single cell may be living with other prisoners but the at end of day sitting all day with criminals and sharing the stories of crime they committed and their neurons adopting it. Its psychological rule whatever you see around you adopt and you practice. Prison education results in decrease in recidivism and also accelerates the literacy rate of the country. Imagine a prisoner getting freedom from the single cell, holding the degree and waiting for the door to open towards his new life. Probably the generations get change.
When you teach the student in college the student always behave good, positive, and obey you. if we teach the prisoners they will eventually come up with better mind and discipline would be maintained inside the walls of prisons. Changes in behaviour can be attributed to improved cognitive capacity as well as to the imprisoned person having the opportunity to feel human again by engaging in an activity as commonplace as going to classes and other social trainings.

When education is done well it engages the imagination. The thing that folks in the prison needs is the ability to imagine themselves better when they get out. When the prisoner get back to the community they will be our neighbours, colleagues, and citizens spending normal lives with the good job and peace. Everyone has the capability and skills but there is need of guidance in the class to polish and explore those god gifts. Prisoners are filled with gifts and talents which were waiting to be realised. Spending half of your age in cell of 8X8 and when released, the world seems strange.

When you educate the prisoner you leave a bunch of options in his mind to survive in a better way after getting released. There are two types of people who are released one those who never come back and lives good life and other who make his way back to the prison cell. Have you ever heard of Norway? In Norway, fewer than 4,000 of the country’s 5 million people were behind bars as of August 2014. Norway has the lowest crime rate as compared to US.
Few citizens in Norway go to prison, and those who do usually go only once. So how does Norway accomplish this feat? The country relies on a concept called “restorative justice,” which aims to repair the harm caused by crime rather than punish people. This system focuses on rehabilitating prisoners.

All prisons in Norway offered education, drug treatment, mental health and training programs. In contrast, adequate funding for such initiatives is lacking in the jails of other worlds.
The education is basic right if you are even biggest criminal. What makes man to commit crime, a hunger?, unemployment? Or a need, but graduated and skilled man never dies of hunger. A tag of skill and graduation is respected everywhere in the world and prisoner can earn a better in any corner of the world to live his life happily. A library in prison may not produce the leaders but can feed up minds to become a civilized citizen. As much as The governments in the world shall spends on prisons, they shall also start the education and training programmes which ensure the learning of prisons and their good future. Good schools in prisons are like feather in a cap. 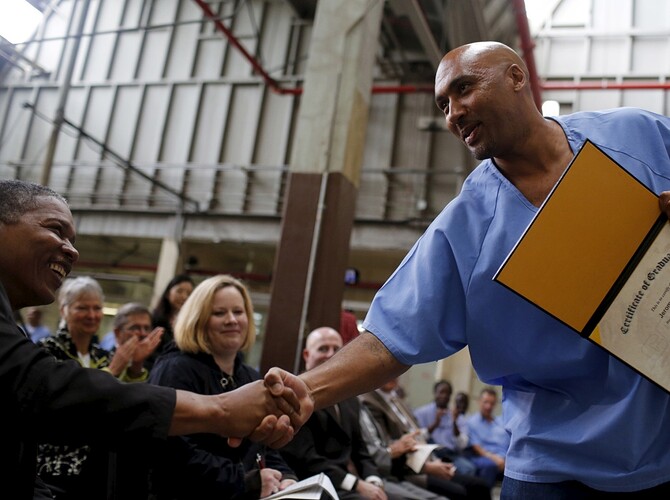 I second you. Knowledge is treasure and everyone has a right to find it. Prisoners should be educated thats how our country will progress.