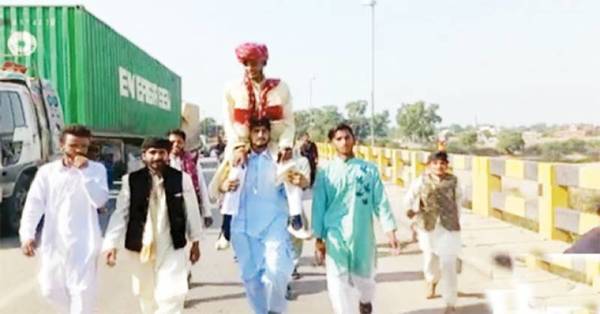 Allow me to retort, this Pakistani Raj Malhotra is a genuine dilwala, the original Romeo, who swam through the river of fire to be united with his Juliet, let the world hear, his name is Jamal Ahmed. Jamal was taking baraat to his soon-to-be bride’s town when on Jhelum river bridge he came face-to-face with a haphazard challenge in shape of Tehreek-e-Labaik Pakistan’s long march, containers were placed everywhere, roads were blocked. Wedding procession couldn’t have proceeded furthermore, valiant man in love but refused to bend down for his dictionary didn’t include the phrase “giving up” (not publisher’s fault).

He decided the baraat will go on like Celine Dion’s magical “My Heart Will Go On” from Titanic, what if his rigid attire and Multani khussay disallowed walking long mile, procession participants carried him on their shoulders like a royalty he was on his special day. They walked and walked and walked for 11 consecutive hours until they stood afront their destination (alright, pause a minute here, that 11-hour part is a bit dramatized, I think I got carried away with story’s deep emotional aspect and tried carving out a more impactful but fictional ending. These people didn’t really walk 11 hours, no one in their right mind would!

About an hour or half on foot and baraatis found transportation, that’s how they reached their destination).

So, once again, the day was saved by the quintessential energy that is the unparalleled, undeniable and irresistible power of love.