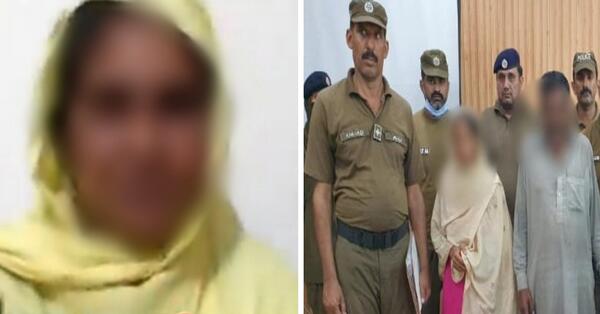 Faisalabad, Punjab; In town 116 JB, Rara Tali, four people including a woman dragged a senior citizen out of her house to strip her naked, physically abuse and parade her in front of hundreds in bazaar. Victim sobbingly told police, the culprits complained her son is a peeping tom, he secretly looks into their house from his roof, when she retorted her son wasn’t even at home, he had gone to their haveli, the heart-rending incident transpired. Assaulting men hit her on exposed chest, shredded her clothing and female accomplice (wife of one of the attackers) forcefully removed any remaining apparel she had on. Neighbours covered her bare body following the ordeal but that aggravation wasn’t enough for quenching aggrieved family’s revenge thirst, they called in more hoodlum reinforcement, who came armed with knives, axes and sticks.

The weaponised group was only able to be dispersed after someone in crowd called police emergency helpline and squad vehicles arrived. Victimised woman, Rasheeda Bibi, then formally filed a case, two members of lawbreaking party were nabbed while two managed to escape, and were at large till the last update. Offenders’ names are as follows.

Victim also angstily appealed to authorities that she be provided protection, as the violent group will most certainly reciprocate arrests aggressively. Punjab Chief Minister, Usman Khan Buzdar personally took notice of Rasheeda Bibi’s inhumane treatment in public and sexual assault, he has instructed RPO Faisalabad, Mr. Imran Mehmood, to present him with a detailed report at earliest. He also ordered culprits’ apprehension and competent prosecution come what may.