End of an era: Bilal maqsood and faisal kapadia have announced to end the Strings band 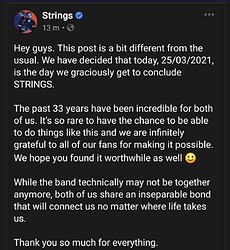 Strings, the famous Pakistani hard rock band initially formed by four college students—Bilal Maqsood, Faisal Kapadia, Rafiq Wazir Ali and Kareem Bashir Bhoy —in 1988 has concluded after 33 years. The news was announced by both the leads on their social media handles.
From Sajni, Urr Jaoon, Mera Bichara Yaar, Chaaye Chaaye, Kahani Mohabbat Ki, Sar Kiye, Dhaani, Soniye and many more sensational and nostalgic tracts, it has all come to an end.
Strings also produced and directed Coke Studio Pakistan from 2013-2017.
Fans are discombobulated and heartbroken over the news of their split. Childhood nostalgias won’t be the same for many of us. What a sad day💔 End of an era indeed!

Even though I don’t listen to music but I am sad for y’all.

feeling sad with alll the fans