Gigantic rock, as tall as a building, falls onto tourists near waterfall 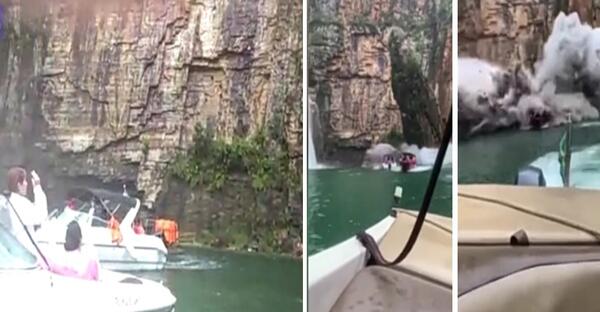 “When the mountains fall and heavens collide”, a fairly popular phrase used literally while talking about judgement’s day, and figuratively while pertaining to someone’s troubles. The latter we come across often, former… not-so-often, in fact not-at-all for that momentous day hasn’t had its sun dawn. In South American country of Brazil although, people have viewed its teaser trailer’s trailer, well actually a minor glance of the teaser trailer’s teaser trailer (that’s how the promotions work these days, deal with it).

At Capitolio Waterfall, tourists were enjoying the pleasant day in company of their families, sailing in their boats and taking a dip into water here and there, swimming short distances, totally oblivious of what affliction was transpiring a couple of minutes later. The ginormous rock piece that separated from cliff and fell straightly onto site visitors, crushing them under rubble, had been showing signs of crack-appearing. 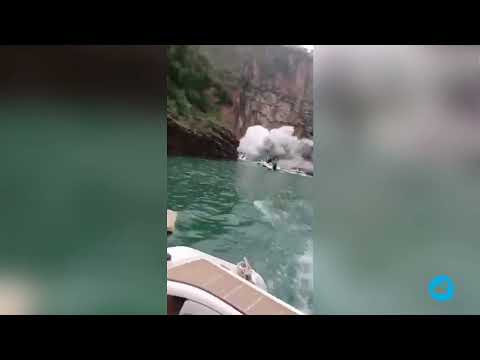 Notwithstanding that apparent warning, some boats still went closer compelled by enigmatic phenomenon known to humankind as curiosity, inessential to say their incautious curiosity got the best of them at the end of the day, seven people died, nine have been severely wounded and three are reported disappeared. All in all, 32 injured were treated in hospital.

Downpour in region for two successive weeks is being cited as the reason for rockfall, taking this into account previously, authorities had officially issued alert to maintain austere avoidance from such sliding-prone cliffsides, officials also state the ‘whole wall’ falling pattern is quite an oddity, usually smaller rock pieces disintegrate and roll down, this time a full part came crashing down, that too with upper side collapsing face-first into water, which is rather bizarre. Rescuers strongly infer an increased fatality count is expected, they feel the presumed ‘missing’ persons might have woefully perished, it’s just a matter of finding the sunken bodies underwater now.

Allah talah, have mercy on us all.

That about validates what my old man always said “keep your distance when ya gut tingles something ain’t right”.