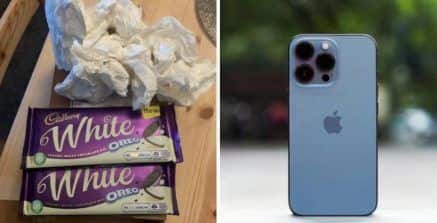 Ordered an iPhone but received something else? - this appears to be a global problem, not just in India. After hearing about hundreds of examples in India when an iPhone buyer receives two bars of soap, the latest story includes Apple, DHL, and a man excitedly anticipating his £1,000 (Rs. 1 lac) Christmas present. Warning: it does not play out as intended.

An Apple customer from the United Kingdom, Daniel Carroll, was enraged when he received chocolate bars wrapped in toilet paper instead of the latest and best iPhone 13 Pro Max. He had been anticipating the arrival of his iPhone 13 Pro Max as part of his Christmas present for quite some time.

However, the delivery was continually delayed, and Daniel was forced to resort to the manual collection after two weeks. He received the delivery after a 24-mile roundtrip and numerous phone calls, only to find two Cadbury Oreo chocolate bars inside.

Carroll, who works in logistics, had his concerns about the package after noticing that the tape had been tampered with. But, feeling heavy, he decided to put his suspicions aside and open the package. He was heartbroken and shocked to discover two 120g White Oreo chocolates instead of Apple’s latest phone.

Now we can eat our phones