In the past few years, people have claimed that mysterious objects such as UFOs have been spotted. These hair-raising incidents sparked off many questions among them. “Are the humans alone?” “Are they the only or advanced civilization on the planet earth?” Well, the astronomers don’t think the same. On top of that, the Pentagon report presents that there is no convincing evidence that alien spacecraft have been spotted.

Similarly, there has been another nerve-racking incident that took place in England where a UFO was spotted flying in the sky. According to the details, a trio of lights in triangular formation was caught on a smart doorbell camera.

Matt Doughty was watching TV with his friend Kevin Barritt and suddenly a notification popped up on his phone. It was that the smart doorbell camera has captured some unusual moment outside of his house. He went to check and then he was astonished to see the creepy scene.

43-year-old Matt played the footage and it was spine-chilling as the doorbell filmed a trio lights UFO making its way across the sky. Here is the footage: 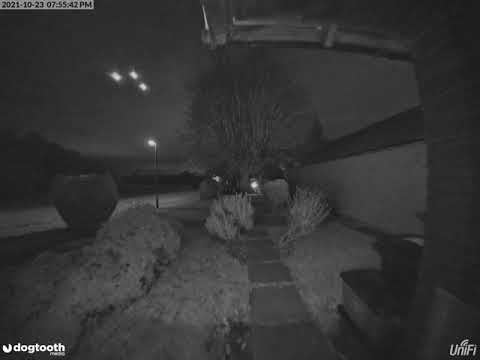 “I was sat with my friend and said ‘blimey, I didn’t hear the doorbell go but I’ve got an alert comes up. I looked at the footage and played it back. It was silent. Three lights came from the sky and I thought it was really weird.”

Logistics manager Matt Doughty then called his aviation buff dad. His dad checked an online flight tracker and claimed there was ‘no plane traffic’ also in the sky at all.

Recently, a couple in Scotland also claimed that they filmed a mysterious object which according to them might be a UFO.