How full moon helped refloat huge container 'Ever Given' from 'Suez Canal'! 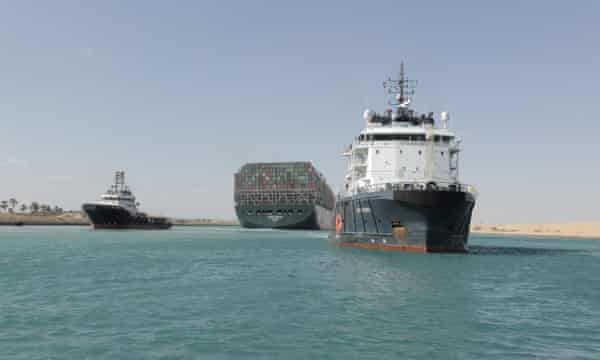 After several days trying to dislodge the Ever Given cargo ship that had been stuck in Suez Canal and embedded itself in the side of canal, the rescue teams pinned their hopes on the week’s full moon. On Sunday, water level were set to rise one and half foot higher than normal days, that made easier to pull 13,000 ft vessel out from the canal side without unloading number of 18,000 or above containers it was carrying.
What exactly does a full moon do?
There are around 13 full moons in a year, out of them only six to eight are associated with tide high enough, because full moon is closest to earth during full moon.
Tides went higher as moon aligned with the sun, which caused great gravitational pull on earth and as a result high tides went higher while low tides went lower known as spring tides.
For more information visit: How the Boat Stuck in the Suez Canal Was Freed | Time
If you are not aware of the story visit
Suez Canal BLOCKED!?
Credit: @mariamustansirr And
The World's Largest & Busiest Waterway Stranded In The Suez Canal Has Been Evacuated?
Credits: @Fatima_Khan

Thankyou so much for the credit!