Ministry of Human Rights Parliamentary Secretary Lal Chand Malhi has termed the University of Lahore’s decision to expel two students for hugging on campus an “overreaction” and asked the varsity to re-admit them.

Personally, I think the ministry is right. Yes, what the couple is doing is wrong and it was something that is supposed to be private. Public displays of affection by an unmarried couple on educational premises should not be okay in the Islamic Replublic Of Pakistan. But was it such a huge crime that they had to be expelled? Numerous students are harassed, ragged on University premises, but no action is taken. I cannot believe that two people that were hugging each other seems more outrageous than harassment.

I think the students could have been given a warning, or they could have gotten a suspension. But rusticating them? That is simply a HUGE punishment! 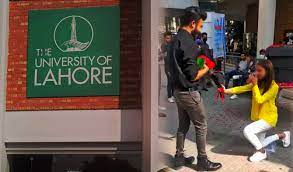 I agree with you. I don’t think they should have been expelled. They made a mistake, that can be forgiven. A light punishment would suffice!

I did not support their expelling. These mindless people have no problem with adultery cases but they expelled a couple who might be marrying soon. Proposing publicly requires guts. Nobody does it in public if they don’t want to marry.

I agree with you. This was a good read.

Totally agree on this.

Thanks! I’m glad you agree