I found this doll on my uncle's grave. What could it actually mean? 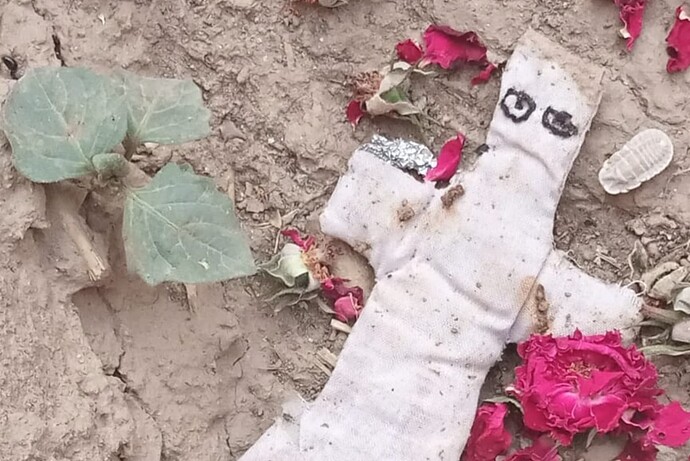 My maternal uncle passed away, succumbing to sudden cardiac arrest on 15th May this year following a month-long battle with his chronic heart condition, 3 days later I went to our city’s cemetery to pray for his departed soul on his grave somewhere between 06:30 - 07:00PM. This cemetery happens to be our maternal side’s family graveyard. After praying for my recently deceased uncle, I moved to say fateha on my older uncle’s grave, a few metres distanced. That’s when this caught my eye, a white puppet-like thing laying aside my older uncle’s grave, who expired in 2011. 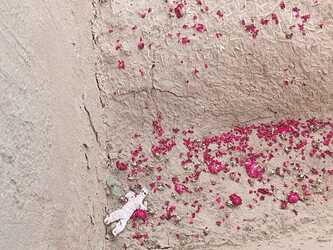 My big brother who was with me, noticed it too. After close inspection with cell phone torch because of nearing dark, following details came to light,

(i) doll was burnt in places

(ii) it had small pokes all over it, done with a needle or similar prickly object

(iv) despite being found at my older uncle’s grave of 10 years, its shape resembled my recently deceased uncle’s physique 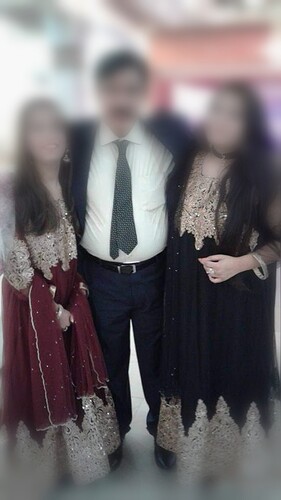 My brother advised me not to touch or take pictures of it. Later, he contacted the religious cleric, who had prayed for my uncle’s recovery while he was alive. He instructed him to go there early morning & throw it in lake, so it may flow away. He strictly advised against burning, ripping or putting it in garbage for disposal, stating this would hurt the person doll was intended for. We went in graveyard at 6 next day, & did as told, doll hadn’t been moved an inch from where we last saw it. That is when I took pictures. 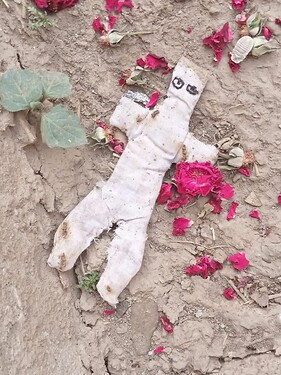 I don’t believe in these things because every time I came across someone knowing magic or black magic in particular, it was all talk & no show, also because this whole concept defies logic & common sense. Hence, I am of two opinions about whole scenario:

(ii) it is black magic ritual done by a believer, though it didn’t actually do or affect anything.

When enquired gravedigger & cemetery’s caretaker whether they saw someone with puppet or a suspicious activity on graves in question. Caretaker told, a woman with a newborn had been coming regularly, in evening or dawn, sometimes skipping a day in between, the week leading to my uncle’s passing, but he didn’t see her partaking in any suspicious acts.

Besides, lone women do visit at such unusual times as there aren’t many people around. He further added she always put money in donation box & twice gave him 100 Rs. for chai paani.

It sounds mysterious and interesting. But we cannot ignore the fact that black magic exist but those who perform this are Kafir’.

I have been told exactly that by lots of my acquainted, & a friend who knew such practitioners, thrice even took me to see it myself. But those were all tricks I later decoded seeing on YouTube & one on AXN’s magic show.

So, while not a unbeliever. Count me skeptical.

That would be just magic tricks but it is a big field.

I dont get it! Why people believe in such things

Well it’s common not a big thing, as we know we are living in superstitious environment, still some places of Pakistan where it is used to make some magic to do some devil activities, so it’s dangerous for the person whom it is made, but not harmful for dead person.

But the said persons were black magic practitioners & that was the best they could come up with.

Many reasons. Illiteracy & superstitious nature for one. They can both be correlated at times but then again, even educated individuals aren’t exempt.

I have been cautious, though according to new information, one can know victim’s identity by opening puppet apart, as it has victim’s belongings sewn inside. Wish, I had done & at least confirmed a part of it, now there’s no closure.

My research has revealed this was a type of voodoo magic where you bury the target’s doll in graveyard, with his hair or other stuff, & that person soon falls ill & dies. Not that it’s like that, it’s just what black magic info says.

Black Magic do exist, even our beloved Prophet Mohammad (S.A.W) couldn’t escape the effects of Magic.
So, recite 4 Quls, dawn and dusk daily.
May ALLAH (S.W.T) bless your Uncle with highest ranks in Patadise.

Omg its so surprice i am shocked its really
?

That’s actually what happened. It could be a prank though but we’re not certain. Till now all signs point to a genuine malice case.

We don’t overly think of it. It’s just that it’s first time we stumbled onto something like this. It’s intriguing, that can’t be denied.