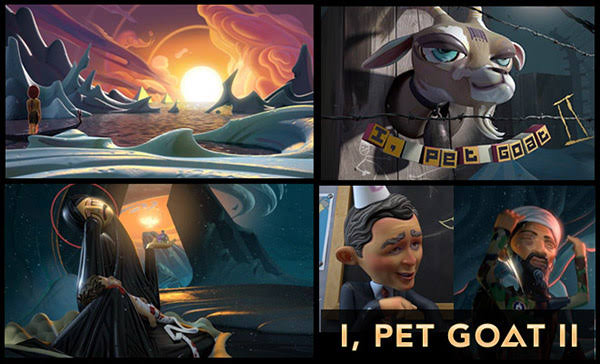 I, pet goat II is a short Canadian animated film released in 2012 produced, written and edited by Louis Lefebvre. The controversial movie shows what happened till this day and what is going to happen in future using strong characters with barely using a word, it has only music and visual effects. The video shows that America was behind this showing everything was according to some high authority’s plan, everyone has their own perspective some say it refers to Israel or evil powers that want to destroy and overcome the whole world.
Summary:
The title picture of video shows a hypnotized goat, has a bar code onto it’s forehead. Then shows hands with with dollar ring and other with blood dripping from fingers (showing universe is controlled by blood and money) that are controlling puppets of America’s presidents George Washington and Barak Obama inside a school brainwashing children’s brain except a white dressed girl, America’s flag tears down and it’s statue of liberty breaks down showing America will be broken, a character referring Usama bin laden and 9/11 incident showing everything was according to plan. A man standing over a floating boat whose heart is burning and has closen eyes, on his forehead there is drawn pyramid and eye, referring to a Christ.
The movie is hard to understand you may find videos decoding it.
The link of the short film is given, share your thoughts about it.https://youtu.be/65xLByzT1l0

Yupp! That’s what I’m talking about

Hahaha did you read it?

Seems interesting. Going to watch it

Do watch the video please, that’s what interesting is…

some of messages given in the video justify the signs of qayamah, most of them are known to muslims. interesting…

bar code on forehead of goat shows we are being watched and we are under control of someone. Astaghfirullah

Yupp!! I also have noticed this

Yess you are right this videos shows cardio conspiracies