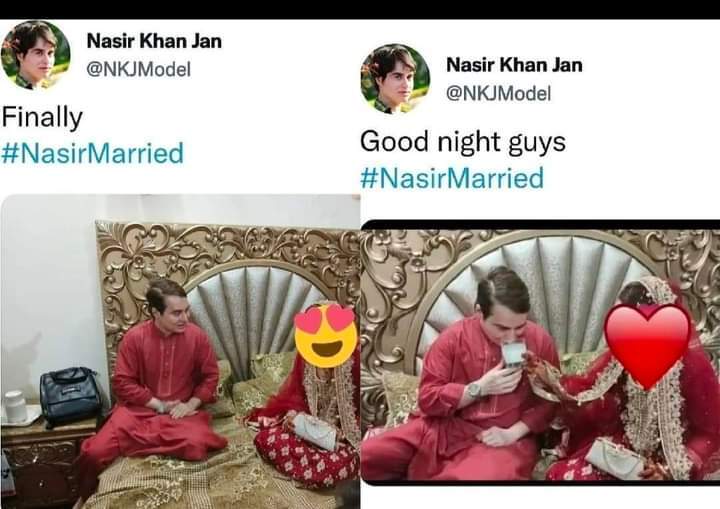 Internet celebrity Nasir Khan Jan, well known for his humorous content online, announced his marriage last Thursday. The event was a private one with an intimate list of invitees. A number of pictures of Nasir himself as well as alongside the wedding attendees were posted by the model with the hashtag ‘#NasirMarried’. He also posted a few heartwarming pictures alongside his wife, which were later taken down due to personal matters but took the internet by storm nonetheless. He later also posted a picture with his wife’s hand resting on his shoulder captioned: “First time going out with my life partner”

First time going out with my life partner, thanks for your love guys pic.twitter.com/iWXZEYDruH

So Happy for you Nasir bhai , May Allah bless you and many congratulations 👏🎉👏👏👍 #NasirKhanJan #NasirMarried https://t.co/I6hS5DnwXI

NKJ himself conveyed the news very heartily, supported by some good humored tweets such as one asking netizens to share the post with their female friends who were heartbroken by the news.

Other netizens expressed sentiments of envy, claiming it to be a shame that an internet icon with so many critics and trolls got to tie the knot before them.

What do you think? Let us know in the comments below!