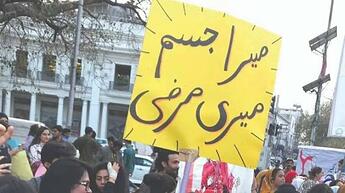 Let’s Today talk about the main slogan of Aurat March. Some say this slogan is being used to promote western styles of exposing bodies while other say it’s misinterpreted. I will be discussing point of view of the both sides here.

This slogan is totally unacceptable.!

Mera Jism Meri Marzi means what the slogan implies. That it is my body, mine. Not yours, not anyone else’s. The people who do not support this statement are backward minded, and they will never be able to step into society as mature people Because literally, grow up! Women are being raped, harassed, on the streets and in their own homes! Women are being killed for honour, slapped for speaking too much. Women are the target of domestic violence! WHY DONT YOU JUST GROW UP AND FACE THE FACT THAT WOMEN ARE STEPPING UP, AND YOU NEED TO STEP UP WITH THEM!

Matlab just look at all the things women have to face at an everyday basis. Aur ap log abhi tak wahin k wahin bethay ho k dont use this slogan.

There is nothing wrong with this slogan, what is wrong is your thinking.

No mann. It is the base of Behyai movement which started in 2019. I am not against women demanding their rights. I am against this slogan because it is being used to say I can dress in whatever bikini shit I want.

Come Onnn. This Slogan means I can wear anything bikini shir I want and express my body. It means I can do Adultery and Nobody can stop me. This Is My Body!
I am not against women demanding their rights and raising voice against harassment. I am against this slogan which is just used to spread behyai in our society.

I did quote her. She means that when she says it. Not Everybody!
This slogan was not invented to say this. It was solely to promote behyai. Everybody knows this. They want Cloths Independence like they have in western countries which could not be allowed at any cost in an Islamic State.

Well despite being a girl, I think I have got the same views as you’ve got…The slogan is totally absurd…But I appreciate the interpretation of Mahira…

I’m sorry but who are you? Just because you’re against a slogan does not make it wrong! If men can do whatever they want, then women should not be opposed to it. Whatever a woman does, or whatever a man does, is between them and Allah. Aap kon ho bhae ye batane walay k kya sahi hai aur kya galat. Don’t tell a woman what to say and what not to say! AGAIN, IT IS BETWEEN HER AND ALLAH. AGAR GALAT HAI TOU KAYAMAT K DIN PATA CHAL JAYEGA NA? ABHI AAP KYU KHUDA BANNA CHAH RAHAY HO BHAE?

Neither of the interpretations make sense.!! Even the second one ,that you put forth as if it might legitimize the slogan, is absurd. No one asks a woman to relinquish her rights over her body. Aurat March has no real agenda to come up with, thats why they capitalize on controversial statements and slogans

Everyone has the right to express their thoughts in limited way and you express yours well.
Good job​:+1:

Nah Nah Girl. If a girl runs naked on the street, should we just say it’s between her and Allah. We are the part of society and we can not let anyone harm the ethics of our society.

I’m agree with you Bro.

They have the right to demand for their rights and they should. But such absurd slogans should be avoided. That’s it.

When I first saw this slogan the thin came to my mind was that you want freedom and if you are being harassed or even rapped you don’t need anyone for help because this is your body and what is happening to you is absolutely your choice.

This slogan must not be prompted. I completely agree with your points!!!

LOL BRO. I know you are kidding