Right-wing Hindu groups have been opposing Muslims offering Friday prayers in public locations in Gurugram, which is less than an hour outside of India’s capital, New Delhi, for more than two months, sparking indignation and worry among the minority.

As a group of Muslims arrived for weekly congregational prayers, a mass of Hindu men began yelling religious slogans, including “Jai Shri Ram,” heckling the worshippers, and stating that the prayers would not be allowed - all while being surrounded by strong police guard.

Gurugram, which has a population of 1.1 million people according to the 2011 census, is a financial and technology center with offices for several global corporations. It has a Muslim population of less than 5%.

Due to a lack of mosques, Gurugram’s Muslims have been praying on Fridays in parks and vacant areas with the permission of the authorities for years. A total of 100 such locations have been set aside for this purpose.

However, in recent months, Hindu protesters have disrupted the prayers, causing city officials to revoke authorization from most of the sites.

A Hindu vigilante named Dinesh Bharti was seen heckling a Muslim imam named Shehzad Khan in a video that went viral last Friday, screaming in Hindi, “Namaz nahi hogi yahan (There will be no prayers here).” He was taken away by police and eventually arrested for inciting and public disorder, according to reports. 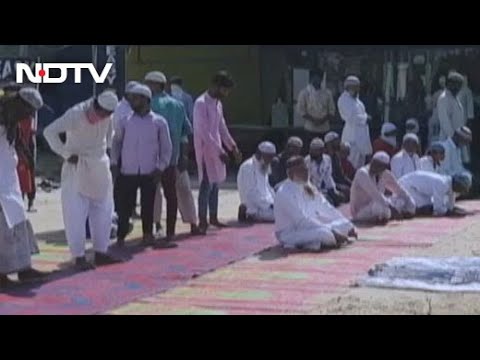 According to Indian media reports, Bharti had previously been arrested on similar charges. Whats’s your take on it? Let us know in the comments section below.