#JusticeForHareem: Three-year-old from Kohat, raped and killed after abduction 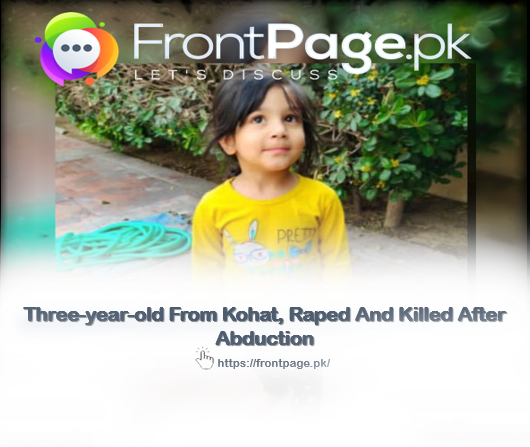 The trend of #JusticeForHareem is gaining momentum on Social Media as
dead body of a three-year-old girl has been found in drain. The girl was a resident
of Khattak colony, Kohat. The postmortem report confirmed that the girl was
sexually assaulted before being choked to death. According to the family of victim,
the girl had gone missing on Wednesday (3:00 PM) when she went to play outside
and never returned. Her dead body was found in a nullah (drain) next morning by a
local resident. The man who found the body claimed that he transferred the body
to the KDA Teaching Hospital for the examination but the lady doctors doing the
night shift declined to conduct the checkup and asked him to wait until members
of the morning shift’s staff showed up. The man told that Dr Sarmat Khan of the
morning shift came on duty, 45 minutes late. The girl’s father blocked the hospital’s
entry by protesting a sit in.

(WARNING: This video may be disturbing for some users. Viewer’s discretion is advised)

The local residents also blocked the Bannu road shouting slogans against the administration over the increasing occurrence of child rapes. The residents called off the protest only when DIG Tayyab Hafeez Cheema along with DPO Sohail Khalid and DC Abdur Rehman arrived at the girl’s house and guaranteed the family of the early arrest of the culprit(s). Police officials said that an FIR is registered against unidentified persons in connection with the murder and an investigation is underway. People all over the social media are demanding public hanging of rapists urging the authorities to come up with proper mechanisms to prevent such incidents in the future.

For once, they should make an example out of the person who committed this heinous crime. Everyday there is a new story. A new victim. A new family.

Yeah. I just hope something actually happens this time. I mean last time (Motorway incident) there were all kinds of demands of public hanging but that didn’t happen. I just wish they do it now.

Yes, I hope so too. Cases like these happen every other day. We run trends for victims and eventually we just…….forget them. I wish something meaningful happen this time.

Ya Allah! This is heart breaking💔

Heartbreaking, i hope justice is served

I hope so too!

This is extremely sad

May Allah grant sabar to the grieving family.

Now is the need to make an example for once and for all by hanging them in public. We demand safety. We demand public hanging of rapists.