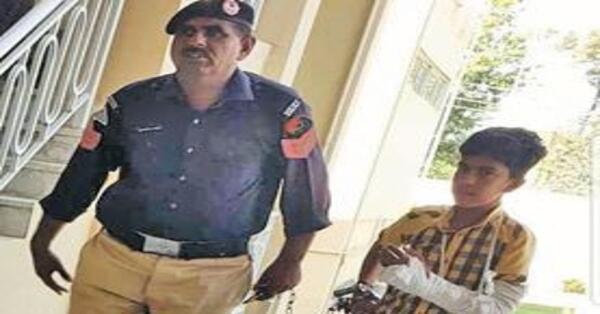 Khyber Pakhtunkhwa - Haripur Police’s head constable, Akhtar Nawaz, has been suspended for putting a 10-years-old boy with a broken arm into handcuffs on his court appearance. He was placed under-arrest for motorbike lifting along with his father, named Khan Afsar and another accomplice, three two-wheelers were found in their confinement that had been stolen from Nadra office proximity, ever since then, the underage felony suspect was kept in Central Jail. Post publishing of child’s district court hearing photos on online mediums like Facebook, WhatsApp etc., criticism poured abound by masses from all directions. 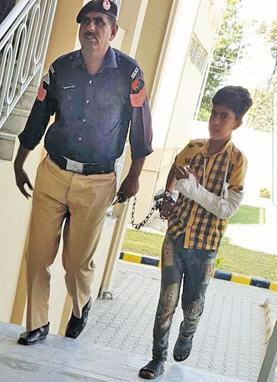 District Police Officer, Muhammad Kashif Zulfiqar, told media he has ordered a departmental inquiry into incident, H. Constable Akhtar’s claims of child in custody being an accessory could be valid, it is still a gross misconduct to put minors into adult prison than juvenile and chaining them up like most wanted criminals despite a visible physical injury. It is also being reported in news outlets and papers and spread on social media posts that accused child thief is hafiz-e-Quran, which is irrelevant to the case as a person could’ve had religious education and still commit an offence, sensationalism of news is disappointing.