Lahore: A brave police officer sacrificed his life in a train crash while rescuing a child

A former Sub-Inspector of Punjab police, Muhammad Siddique was martyred in a train collision while rescuing a kid playing on the track at Ravi Road Gate No. 5 in Lahore.

DIG Operations Sajid Kayani said that the youngster out of nowhere came on the track while playing the game and keeping in mind that saving him, the previous sub-examiner Muhammad Siddique gave his life.

@Godmade__
A sub-inspector in Lahore gave away his life to rescue a stranded kid from being run over by a speeding train. The kid had accidentally got on the rail track while playing there.

Police is your duty to help you.

Each cop, if in uniform, is devoted to helping. Resigned Sub-Inspector Muhammad Siddique saved the kid by giving his life. 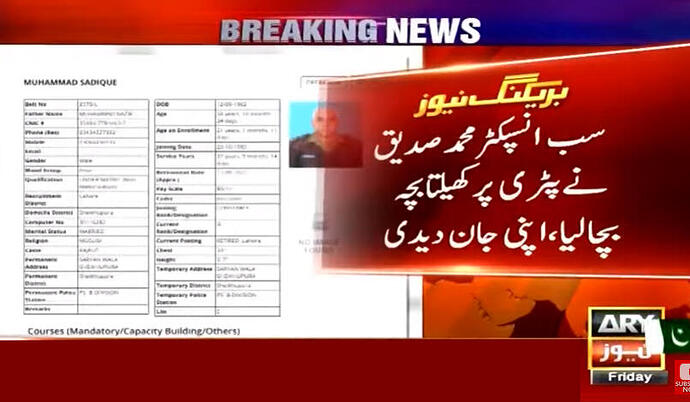 SP City Lahore, Hassan Jahangir said that the previous sub-inspector was passing by for his work and when he saw that the kid would be hit by the train, he ran towards the track and saved his life. Forfeited his life

SP City said that local people informed about the episode, the kid couldn’t be recognized quickly, insights concerning the kid’s family are being acquired.

Former Sub-Inspector Muhammad Siddique was selected as a constable in 1983. He was retired last year following 38 years of administration in the police office.

He is the real hero of the nation. This inspector will also have parents, children, and family, but his duty has been recognized above all. Peace be upon such great people. Due to such kind people, life remains in society.

What are your views about such legendary people? Let us know in the comment section below.

What a tragic news of proud !!

Hero of the nation