Making videos or posing for pictures while a person is burning behind you. Is this Hamara Pakistan? 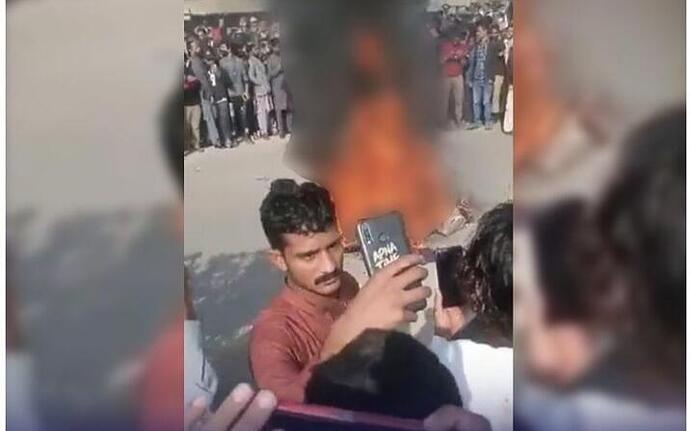 On Friday, a mob in Pakistan’s Sialkot tortured a Sri Lankan national to death before burning his body, according to reports. Police were then dispatched to the area, according to sources, to put the situation under control.

According to a report by Dawn.com, the event occurred on Sialkot’s Wazirabad Road, when private industrial workers allegedly beat the factory’s export manager and burned his body after killing him. The individual, named Priyantha Kumara, was a Sri Lankan national, according to Sialkot district police officer Umar Saeed Malik.

According to news agency PTI, Priyantha Kumara, who was in his 40s, allegedly tore a poster of the hardline Tehreek-e-Labbaik Pakistan (TLP) with Quranic verses imprinted on it and put it in the trash.

@ImranKhanPTI
The horrific vigilante attack on factory in Sialkot & the burning alive of Sri Lankan manager is a day of shame for Pakistan. I am overseeing the investigations & let there be no mistake all those responsible will be punished with full severity of the law. Arrests are in progress

As further arrests were made and outrage for the lynching of Sri Lankan manufacturing manager Priyantha Kumara in Sialkot on blasphemy charges grew, before the heinous assault, a colleague of the man attempted to defend him from the mob, according to fresh footage.

Before the lynching, the footage was captured of a coworker attempting to safeguard Kumara on the roof of the workplace where he had escaped as the mob of roughly two dozen people gathered in size.

Some of the crowd may be heard in the video. While the colleague tried to shelter Kumara with his body, who clung to the man’s legs, they sang slogans and said: “he (the manager) would not escape today.” The workers had beaten up the colleague and taken Kumara out onto the road, torturing him and killing him there and then. The mob then set fire to the body.

On the one hand, a guy can be seen assisting in the rescue of the Sri Lankan factory manager, while on the other hand, the general public can be seen filming the scene rather than assisting him or screaming for help. Is this our way of life? Is this our clan? Is this the Pakistan we know?