Man, unable to get education for himself, turns mosque into school in Pakistan's remote village 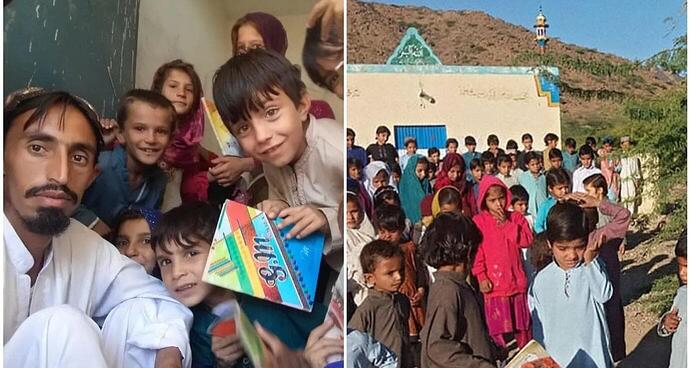 In addition, the community in the northwestern Khyber Pakhtunkhwa region has never had a school, a situation that Muhammad solved four years ago by setting up a makeshift school within a one-room mosque.

The school now has 120 students, 40 of them are girls, who are divided into two three-hour shifts. Muhammad is the only instructor in the district, and he hopes that the district administration and wealthy citizens will assist him in upgrading the facility.

“It was very troubling for me to see children just loitering around, spending time climbing trees or taking cattle for grazing to the hillside,” Muhammad told Arab News, describing the state of affairs before he launched the mosque school. The 31-year-old, who never received a formal education, arrived in Karachi with his family in 2008. Muhammad studied privately during his time in Karachi and received his matriculation in 2014. Then he began teaching primary school children and providing home tuition to Karachi students.

He returned to his birthplace in 2016 and began coaching two children at his little village home. However, as the number of students grew, Muhammad chose to relocate his courses to the village mosque, where he has been teaching grades 1 through 4 Urdu, English, and Mathematics since 2017. Muhammad claims he has knocked on every home in his hamlet, requesting assistance in building a school, but to no avail. He has promoted several of the younger children he has taught to higher grades. To complete their education, they had to relocate to other parts of the province and country.

The school received stationery from a local charity this week. Muhammad claimed that after completing paperwork, the district administration promised to provide him with furnishings.

“I’m appealing to the government and the wealthy,” he stated. “To provide a hand and provide a monthly stipend because I have two children and parents to support.”

A little time and effort spent teaching someone to read and write can go a long way - perhaps not as far for the one who provides, but certainly for the one who receives. Muhammad deserves a pat on the back!