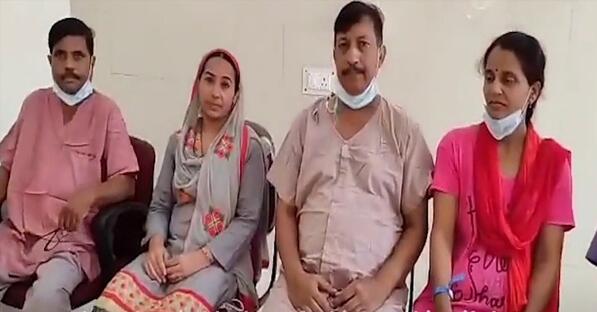 New Delhi - In these testing times of communal tensions between Hindus and Muslims, two women, practising these two vastly different faiths, set an applaudable precedent of unity and harmony by donating their kidneys to each other’s spouses, showing that in the end humanity triumphs over all the mundane disputes and grievances we hold. Sushma Uniyal and Sultana Ali’s husbands, 50-year-old Vikas Uniyal and 51-year-old Ashraf Ali had been looking for kidney donors since year 2019 to no success. Their wives couldn’t donate theirs to them either because of non-matching blood groups. Another part of reason was the long-awaiting list of organ recipient patients. At this exact moment, the puppeteer upstairs who controls the fates of his puppets, set into motion his ploy he had orchestrated for them. The two families came face-to-face while searching for answer to their longstanding woes in Uttarakhand state’s capital city Dehradun.

Like famous Brasilian author, Paulo Coelho said, “When you look for something, the whole universe conspires in helping you to achieve it”. One day, couples’ nephrologist, Dr. Shahbaz informed them of an accidental discovery while going through the reports of dialysis-ridden patients, he let them know Sultana’s blood group matched Vikas’s and Sushma’s was compatible to Ashraf’s. Both households, accepting the odds at they were at, unanimously decided what the forces of nature had led them to, it was clear they were to help each other in the face of mutual adversity, and go forward with the conspiracy universe hatched for them in the donors’ absence and no other options left. Sultana and Sushma, both made the choice to donate their organs to each other’s better halves.

This organ transplantation process was successfully carried out in Himalayan Hospital, donors and recipients were both told to be in stable health with no serious side-effects. The peace prevailing, goodwill building instance is being hailed as epitome of interfaith unity in local and international media. A solid reminder that society’s anarchist elements may purport their hate ideology the best they can, just one considerate gesture like this can have it come crumbling down to ground, turned into worthless debris.

Applaudable example of harmony and peace.