Fakhar Zaman was run out in the second One-day International between Pakistan and South Africa in Johannesburg on Sunday in controversial circumstances. Batting on 193 at the start of the 50th over with Pakistan needing 31 runs to win, Zaman decided to come back for a second run after playing the first ball towards the off side. South Africa wicket-keeper Quinton de Kock, who was waiting to collect the ball at the striker’s end, gestured as if to suggest that the throw should be at the non-striker’s end. As Zaman was blindsided with his back towards the fielder, the stumps at the striker’s end were disturbed with a direct hit even as Zaman, who had presumed a throw at the other end, was found short of his ground.

Zaman’s dismissal courted controversy with the ‘fake fielding’ rule of the International Cricket Council (ICC) in place to deter fielders from distracting batsmen.

Clause 41.5.1 states that ‘‘it is unfair for any fielder wilfully to attempt, by word or action, to distract, deceive or obstruct either batsman after the striker has received the ball.’’
Further, clause 41.5.2 says that “it is for either one of the umpires to decide whether any distraction, deception or obstruction is wilful or not.”
The on-field umpires did not object to the dismissal and Zaman had to walk back to the pavilion.

Pakistan lost the match but won our hearts

193 runs
155 balls
18 fours and 10 sixes
What an exceptional knock from Fakhar Zaman played an extraordinary inning. 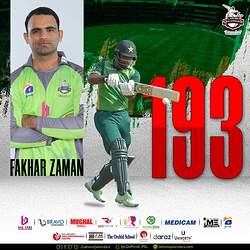 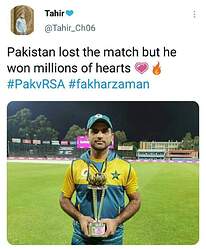 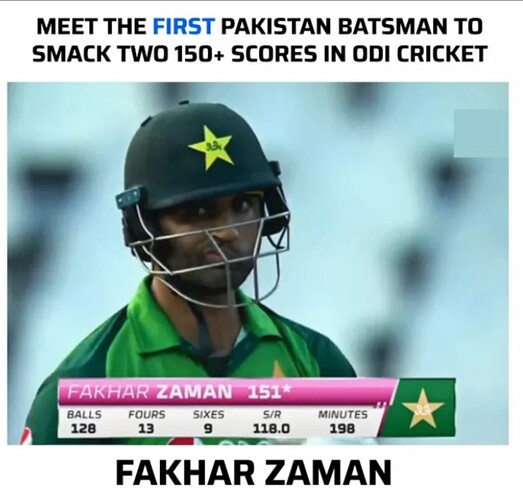 Give your 100% and fight till end. What motivation you people get?

Insane stuff from an insanely gifted athlete. Mind blown by the display of sheer talent & brilliance!

Absolute brilliant performance by him!! fought like a lone warrior. Well, he proved today that one should not get panic, if you have control on your nerves you get through any tough stage

If he had any confident brute hitter on the bowler end then surely the match was ours, but after losing it, we still have won this match💪 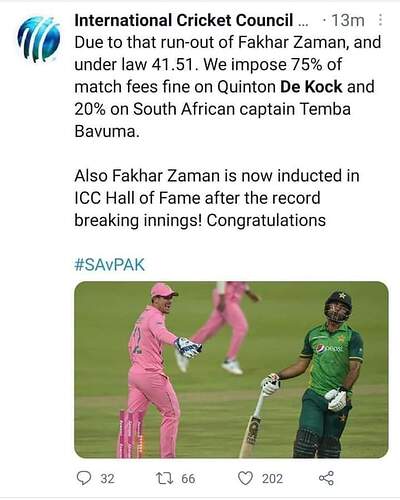 I think its fake.
https://twitter.com/ICC?s=09
This is the authentic twitter handle of icc.
@Qamar896