Over the course of recent centuries, the methods of warfare have changed drastically. Now, the old and traditional methods of defeating the opponent are considered obsolete and, therefore, not taken into use. The modern tactics of warfare rely heavily on geopolitics, the country’s geographic location and the politics concerned with it. Today, the warring states try to make use of their geographic locations by encircling their rivals and narrowing the path for them.

Due to this reason, one can observe many conflicts today which are based in waters. The straits, sea lanes, canals and jurisdiction of states over their waters all play their roles in fueling conflicts. From the strait of Malacca to Hormuz or from Indian Ocean to Pacific, countries are vying for dominance in the sea, so that they can not only reap the dividends but also gain geostrategic advantage vis-à-vis their rivals. Therefore, to understand the international politics of the sea, it becomes sine qua non to understand the law of the sea, a short account of which is given hereunder. 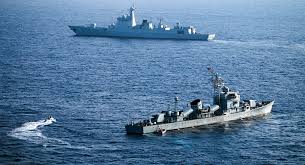 The United Nations Conventions on the Law of the Sea (UNCLOS) is concerned with public order at sea signed on December 10, 1982. The convention, described as a “constitution for the oceans,” represents an attempt to codify international law regarding territorial waters, sea-lanes, and ocean resources. After being ratified by 60 countries, it came into force in 1994. However, by the early 21st century the convention had been ratified by more than 150 countries.

According to the 1982 convention, each country’s sovereign territorial waters extend to a maximum of 12 nautical miles (22 km) beyond its coast, but foreign ships are granted the right of innocent passage through this zone. Passage is innocent as long as a ship refrains from engaging in certain prohibited activities, including weapons testing, spying, smuggling, serious pollution, fishing, or scientific research. Where territorial waters encompass straits used for international navigation (e.g., the straits of Gibraltar, Mandeb, Hormuz, and Malacca), the navigational rights of foreign shipping are strengthened by the replacement of the regime of innocent passage by one of transit passage, which places fewer restrictions on foreign ships.

Beyond its territorial waters, every coastal country may establish an exclusive economic zone (EEZ) extending 200 nautical miles (370 km) from shore. Within the EEZ the coastal state has the right to exploit and regulate fisheries, construct artificial islands and installations, use the zone for other economic purposes (e.g., the generation of energy from waves), and regulate scientific research by foreign vessels. However, foreign vessels and aircrafts are entitled to move freely through (and over) the zone.

These conventions, therefore, must be complied with in international relations to save the world from annihilation in the era of greed, lust and insatiable desire for power.