Moderna says its vaccine is 94.5% effective in preventing Covid-19

Moderna Inc’s experimental vaccine was 94.5% effective in preventing Covid-19 based on interim data from a late-stage trial, the company said on Monday, becoming the second US drugmaker to report results that far exceed expectations.

Together with Pfizer Inc’s vaccine, which is also more than 90% effective, and pending more safety data and regulatory review, the United States could have two vaccines authorized for emergency use in December with as many as 60 million doses of vaccine available this year.

Next year, the US government could have access to more than 1 billion doses just from the two vaccine makers, more than needed for the country’s 330 million residents.

The vaccines, both developed with new technology known as messenger RNA (mRNA), represent powerful tools to fight a pandemic that has infected 54 million people worldwide and killed 1.3 million. The news also comes at time when Covid-19 cases are soaring, hitting new records in the United States and pushing some European countries back into lockdowns.

“We are going to have a vaccine that can stop Covid-19,” Moderna President Stephen Hoge said in a telephone interview.

Moderna’s interim analysis was based on 95 infections among trial participants who received either a placebo or the vaccine. Of those, only five infections occurred in those who received the vaccine, which is administered in two shots 28 days apart.

“This news from Moderna is tremendously exciting and considerably boosts optimism that we will have a choice of good vaccines in the next few months,” said Peter Openshaw, professor of experimental medicine at Imperial College London.

“This latest press release is based on a study of 30,000 US adults, including many high-risk or elderly persons. This gives us confidence that the results are relevant in the people who are most at risk of Covid-19.” 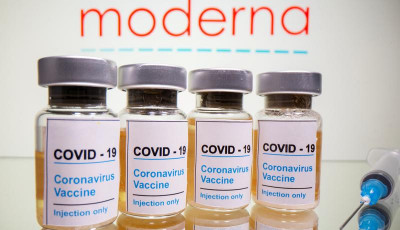