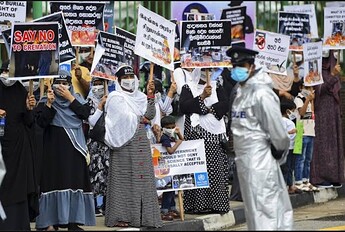 This is his first visit to Sri Lanka after taking the reins as the President-elect. The meeting took place at Temple Trees, the residence of The Srilankan Prime Minister.
During his visit, the Muslim minority in Colombo protested against the government for the cessation of forced cremations of Covid 19 fatalities. They carried a coffin, censoring the government for their policy of burying the dead disregarding their funeral observances.
Two weeks before the visit Imran Khan reflected on the predicament of these minority Muslims. Srilankan Prime Minister Mahinda Rajapaksa on 10 of February, proclaimed that burials would be allowed but later on Colombo back paddled and announced that the cremation-only policy will pertain.
The demonstrators assembled in an open space in the forepart of the President’s Office.
The government has dismissed suggestions from its experts to entitle Muslims to bury their dead by the Islamic conventions.
The ban was imposed in April on mere concerns conveyed by Buddhist monks stating that burying these bodies could tarnish the underground virus resulting in the spread of the virus. These concerns however are considered baseless by WHO and health experts.
Almost 19 covid 19 victims were cremated in December including a baby after their bodies were denied to be taken by the respective families. Muslim constituency leaders say more than half the 450 Covid-19 victims belong to the Muslim minority which accounts for just 10 percent of the 21 million population.
Muslims have an incommensurate number of casualties because they don’t pursue treatment, worrying they will be cremated if they are diagnosed with the virus.
This stoked grief and resentment among the Muslim community, centrists, and abroad, with the 57-member Organisation of Islamic Cooperation continually articulating fear.