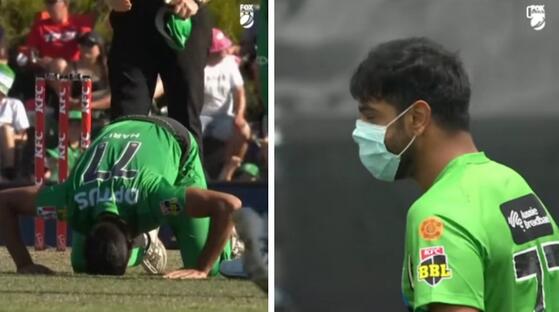 Australia’s annual T20 cricket competition, KFC Big Bash League, made a big enough blunder while showcasing their Pakistani express fast bowler Haris Rauf’s different nifty manoeuvres of wicket-taking celebration. What happened was pacer’s new Covid-19 inspired celebratory style, used against Perth Scorchers, became talk of the town, with cricket fans worldwide adoring that, finding it distinctively entertaining and the news outlets giving it significant coverage. That peculiar way of commemorating wickets made Big Bash League’s public relations team share a compilation of unique Haris Rauf celebrations, which was as wholesome and harmless as it can get, except for one thing rubbing the Pakistani cricket fandom wrong way; The description.

Big Bash League social media wrote, From kissing the dirt to killing the germs, Haris Rauf’s wicket celebrations have covered all the bases.

World’s second-most popular sport’s Pakistani enthusiasts weren’t pleased with the Australian knowledge; or lack thereof regarding Muslim gratitude offering gesture to God, the sajdah-e-shukar (kneeling before Allah, having forehead touch the earth surface beneath), though plenty found this offending and reacted provocatively, the majority comprehended it was an innocent mistake done unknowingly, sans any malignant advertence. They were expeditious in pointing the error out and correcting it appropriately in feedback section along with your usual angered suspects.

The BBL account has not edited the caption to rectify their mistake, neither have they provided any response in reply of fan elaborations. Guess that’s typical social media admin behaviour; wait till the dust settles and issue dies down, which is not a bad thing as long as the lesson is learned and errors are not repeated, for not everything has to be presented in public eyes to prove you have grown not prone to the errors of past.