Nemrah Ahmed, a writer, called out show makers and writers for creating a "Toxic hero culture"! 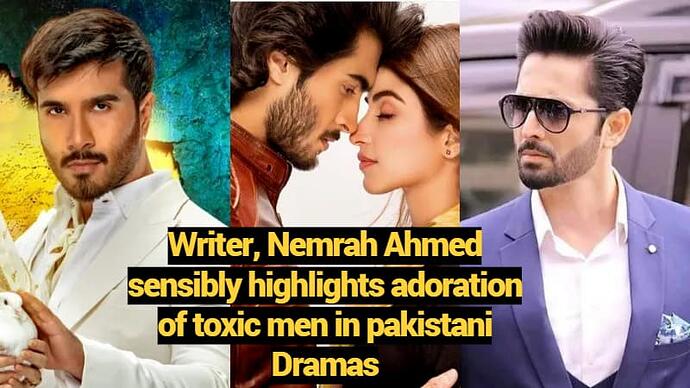 The controversy about toxic portrayal of heroes in Pakistani shows has been brought up far too many times. The audience has seen the incessant arguing of main ladies onscreen and females pitted against each other before. They’re also storylines that the audience has grown tired with.

On Wednesday, the writer, who is best known for her Urdu work Jannat Ke Pattay, came to Instagram to discuss current plays with “toxic hero culture”. 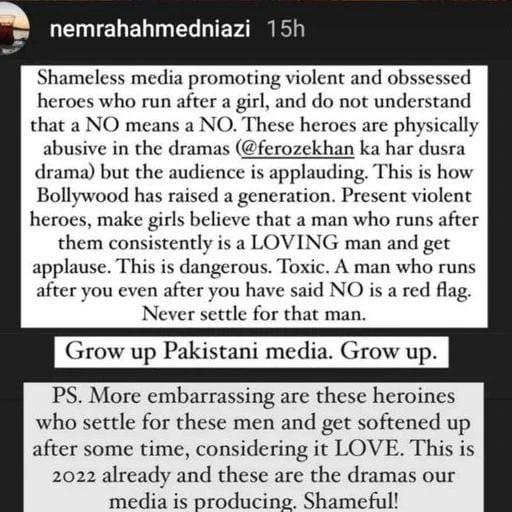 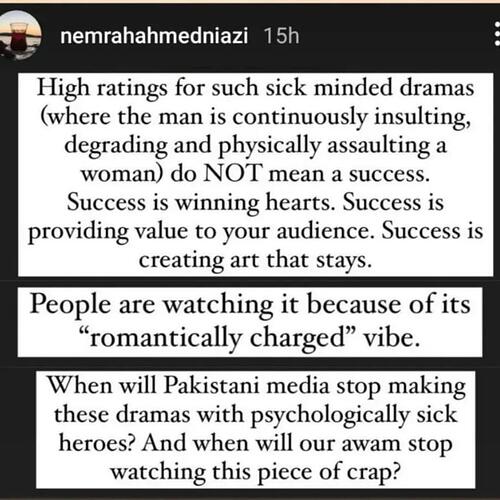 Nemrah further said “A wealthy and handsome playboy keeps pursuing a middle-class girl. He kidnaps her, stalks her, abuses her, he shouts at her, physically assaults her but he is still the hero In the end the hero wins over the girl. That is where these dramas end. Love wins. They call it Ishq ,” she added that “He only plays one kind of role and in the end, he is just glorified as a lover. He needs to be responsible enough to choose roles wisely.”

she highlighted the effect on the audience of showing toxic partners, heroes onscreen and on national television. “They become Zahir Jaffer. They pursue Noor Mukadams and they don’t let go of them,” she added. "On one side we are fighting Zahir Jaffers and on the other hand, we are glorifying these narcissistic men?" 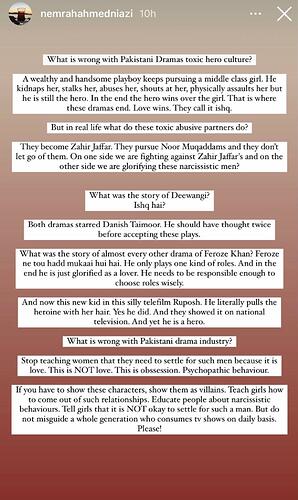 The writer draws attention towards telefilm Ruposh in which haroon kadwani has played a rebellious and abusive character. “Now this new kid in this silly telefilm Ruposh. He literally pulls the heroine with her hair. Yes, he did. And they showed it on national television. Yet he is a hero,”

Nemrah summed up with, "Stop teaching women that they need to settle for such men because it is love. This is not love. This is obsession and psychopathic behaviour."

what is your stance on this issue?

This woman is spot on 100% our heroes are biggest creeps who are presented in guise of heartthrobs. Sadly these tv serials are fairly popular among our women

they eat
up every bullshit, whatever in plate is put in front of them.

That authoress lady sounds pissed off for no reason, as long as the abusive men aren’t shown in positive light, it’s totally okay to portray their characters onscreen.

Not everyone has to be perfect, flaws are a part of what makes us human.

when did it happen?

To some extent Nimra Ahmed is right that these dramas focuss and highlight negative behaviour of the hero rather than the positive. It is also perceived by the audience in the same manner so as a result it gives our youth this direct message to be stubborn and psychopath and never try to understand girls feelings