Pakistan, A nation of sacrifices from 1947 to covid-19

14 August 1947, the day of independence and road to the sacrifices. During the partition of 1947, the train arrived in Lahore train station full of horrible bloodshed, the train Quarters were full of dead bodies, blood spilling over train entrance doors. The woe, agony, and grief began from there. When folks stepped in to train, their feet submerged into the blood. The younger and older, males and females all were slaughtered and looted by cruel men who might want to show aversion towards the decision of partition.

Not a single train we received was free from loot and horrible bloodshed.

Many ordinary Pakistani folks relinquished capital, land, and everything worth giving from their lockers. The daughters and mothers gave them all jewelry to make Pakistan stable financially. After the independence in 1965, hostile India attacked Pakistan. The digital and social media was busily astir with stories of courageous sacrifices manifested by the armed forces and how Indians were taught a befitting lesson for their aggression upon motherland.

During the war with India entire nation turned to borders and stood shoulder to shoulder with jawans of the Pakistani army with their licensed weapons. The women too were praying for peace and success of war at home, women were busy making food for the Pakistani military and civilians fighting at the border. Those sacrifices and prayers likely brought colors and Pakistan defeated India in the war of 1965. Almost 5800 Pakistani soldiers were martyred and sacrificed for the motherland according to BBC news. At that time Pakistani government ceded everything to make this nation live. Almost a decade ago the wave of terrorism peaked during 2009 and Pakistan as one nation was again ready to make sacrifices.

The Pakistani government is the only Muslim legitimate regime that didn’t leave any extremism to provoke its sovereignty and disperse, create panic and anxiety among Pakistani civilians. But terrorism did so, but Pakistani people never stepped down and didn’t sit on their knees and fought hard. In the end, Pakistan as a nation won by sacrificing almost 60000 civilian lives to bring peace to this motherland, more than this Pakistan bears an economic loss of $120 billion.

Across all these sacrifices when the former Pakistani cricketer went to the door to door to raise funds for Shaukat Khanum free cancer hospital, the daughters and citizens of this land sacrificed, savings, gold, and properties. The annual expense of Shaukat Khanum is 3.6 billion rupees, of which half becomes from donations and zakat to the hospital. The rest is raised from hospitals selling its services and 25 percent of paying patients.

The flood of 2010 weakened Pakistan anyhow drowning the whole country and making a property loss of $43 billion ( estimated). At its worst the floodwaters covered roughly one-fifth of Pakistan’s land area,18 million people were affected, sacrificing 1,985eople lives,12 million people’s homes were damaged or destroyed,2.2 million hectares of crops were destroyed,10,000 schools damaged or destroyed and

450,000 livestock lost and many families got separated. Besides massive loss and sacrifices Pakistani people still come out to survive as a nation and rebuilt Pakistan firmly and strongly, ignoring and bearing the scars of the flood. How can we forget the unstoppable services of edhi foundation centers contributing a major part to the flood of 2010 and many ecological disasters? With help of the international community Pakistani people too helped each other to rebuild during this natural ecological disaster. The journey does not end here the former chief justice of Pakistan raised funds for the diamer of the Badshah and Muhammad dam despite the faltering economic conditions and crisis Pakistani nation contributed almost 11.32 billion and the number is increasing so on to save the motherland from water crisis for the coming generation. The Pakistani nation has resilience belief to counter every natural disaster. Pakistan is the only nation peasants are wealthiest when it comes to national integrity.

As before we have won every battle and survived, Pakistan is the land of pure people if it is a natural disaster, the war against terrorism, the war against a hostile country, or any pandemic situation we as a nation take a firm stand to fight for it. Let’s appreciate the donations of the jack ma foundation and Ali baba as they donated millions of masks and other equipment to fight for covid-19. The CM Sindh received a check of 1million in the covid-19 fund by the anonymous person this shows that faltering economic Pakistan is still rich.

Million people contributed their salaries to the welfare funds and bought groceries for those who are daily wagers or unaffordable ones. This was the time to donate what you have, no one takes savings to the graveyard. China’s help must be appreciated too and China as a country always stands with Pakistan in hard times and the covid-19 situation China is also planning to send a medical expert team to fight against covid-19.

The thousands of welfare organizations went home to home and asked for the help of those who are unable to eat covid days.

As a nation we should face this pandemic situation, we can control it by taking precautionary measures. We have overcome two of its waves and hopefully, we will also win in the third wave. 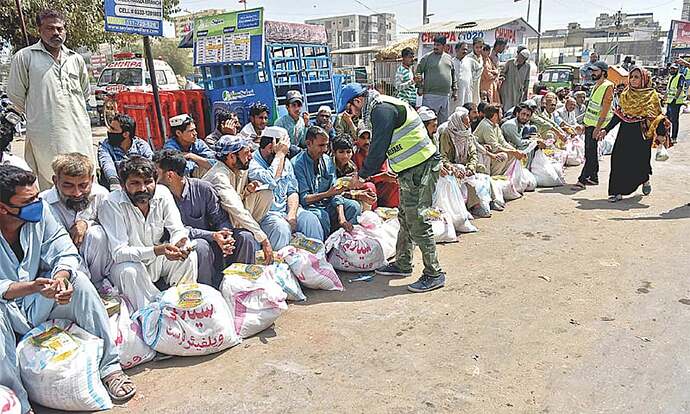 We sacrifice and emerge stronger after every disaster.

So True. In sha Allah.

This is beauty of my Pakistan. Together we stand💯

Good days are coming for this nation after uncountable sacrifices Inshaallah