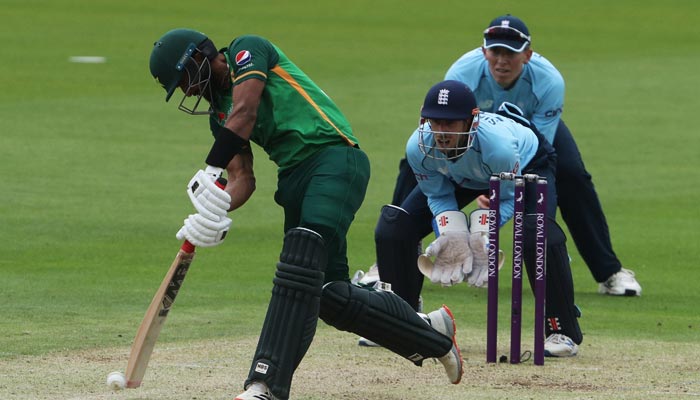 359600_1566183_updates700×400 44.1 KB
Image: AFP
A summary of the matches
Last night, the final match of Pakistan’s tour to England took place in the form of a thrilling match which had us on the edge of our seats until the last moment. The match resulted in a 3-wicket win for England, concluding the T20 series in a 1-2 loss for Pakistan following an upsetting whitewash in the ODIs. Pakistan is set to face West Indies in a T20 series later this month and then participate in the T20 world cup later this year, which makes it imperative that the team’s performance is analyzed for the room requiring improvement and propagated towards said improvement.

This series being the first international series for the team since May, I was super excited to tune in, spending hours up past my usual bedtime to follow the late night matches. It was rather underwhelming to find the team not even putting up a good fight before losing most games. In the first ODI, Pakistan were bowled out for a scanty total of 141, which England chased without even breaking a sweat with just a player down.

In the second one, in spite of winning the toss, Pakistan attempted an unsuccessful chase for 248 runs, getting bowled out for just a hundred and ninety five. The 3rd ODI was a spectacle in terms of performance, with Pakistan setting a good total of 331 and England managing to chase it with 3 wickets and 12 balls remaining. Regardless of the outcome, a good fight is always appreciated.
In the T20s, in spite of getting a good start with a win in the first, the team failed to chase the total in the second and failed to defend their own in the third. The third was, however, an entertaining watch as we watched the score be chased to the last 3 balls.

What went wrong
According to former Pakistani bowler Abdul Rauf, the team lacked a “fighting spirit” as shown by their body language. Getting off to a bad start was demoralizing, and the players didn’t put as good of a fight as they should have, down to the last ball. The team lost the first ODI match to an English team which was full of debutants. According to him, the PCB has faulty management and a weak set up, due to which they fail to produce an effective batting lineup. He also added that the PCB had not arranged even one cricket tournament of district or city level in the past 2 years. Rauf also said that while Babar Azam is an incredible batsman, he is rather lacking as a captain and cannot read different situations and produce a result accordingly. He added that the batsman does not do well under pressure.

Former captain Misbah ul Haq also made a statement, blaming the team’s poor performance on Pakistan’s weak domestic cricket setup. He also believes that the English team is very resourceful and has a strong system with an availability of choices, due to which they can afford to replace players on demand without difficulty. Finding replacements for players becomes difficult for Pakistan on the other hand. He added that the bowlers didn’t seem to be following a bowling plan, nor were the fielders cooperative.

As for the T20 matches, we could see a lack of formidable partnerships which generally break or make a match. Impulsive, and not well-calculated shots led to subsequent fall of wickets in the T20s and eventually took down the entire batting line up. The first few overs are critical to establish a running partnership rather than increasing the run rate through impulsive shots, as the latter can be well compensated for during the later overs if there is a formidable batting line up still standing. Early loss of wickets breaks an innings.

Anyways, here’s to hoping Pakistan has better performance in the upcoming series against West Indies next week. Looking forward what the team has in store for us!

Anyways, here’s to hoping Pakistan has better performance in the upcoming series against West Indies next week. Looking