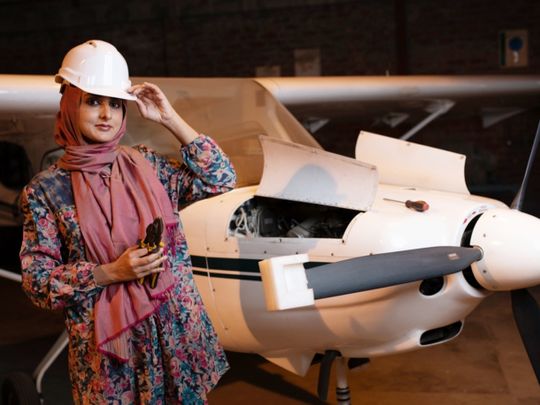 Dr Sara Qureshi is an aeroscope engineer and a founder of Aero Engine Craft (pvt) limited. She had completed her PhD degree in Aeroscope engineering from Cranfield university UK. Being an environmentalist at heart, She has been working since 2018 to develop an ecofriendly aircraft engine that will reduce the aviation induced global warming, making air travel more sustainable. She aims to complete this project between mid to late 2020.
While talking to Gulf news she said,

“ The climate challenge for aviation in the atmosphere is huge and the industry is aware of the problem. At Aero Engine Craft, we are devoted to offering a solution to save the planet by reducing the Aviations’s climate impact due to contrails”.

What is contrail phenomenon?

Contrail is a visible white streak of smoke emitted from an aircraft’s jet engine during flight due to changes in air pressures. These contrails trap heat inside the atmosphere contributing more to global warming than CO2 emitted from the aircraft.

How this engine works?

Further telling about her invention she said,

“Our invention is a turbomachinery which can be fitted in an engine to separate out the water vapours of the exhaust emissions and contain it on the aircraft to be released before landing to reduce global warming.”

Moreover the engine which she is developing can also create artificial rain. This engine has a pressure based condensation system that helps in cooling the water vapours in the airplane exhaust. This water will be on airplane and can be released as rain if required.

The world aviation industry is focusing more on developing the fuel efficient rather than ecofriendly aircrafts. It should focus more on neutralizing the negative impacts of aircraft pollution and less on extracting the monetory value. The biggest misfortune that our earth is facing right now is environmental pollution. The amount of carbon dioxide and other heat trapping gases released during burning of fuel has increased in the atmosphere leading to global warming. This has lead to shrinking of Greenland and Antarctic ice beds that are melting at a rate six times faster than in the 1990s. This is adding more water in the already rising seas, with the acidification of oceans due to CO2 and a decline in the arctic life.

This is fortunate that the world is now talking about climate change holding discussions and meetings after the young climate activist Greta Thunberg, decided to sail across the Atlantic rather than fly. According to Elon musk, who is working on Mars program “ Earth is the best bet and must be saved”.