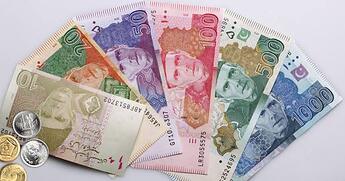 images (82)764×401 52 KB
While quoting the Bloomberg report in his latest tweet, Pakistani Economist Muzammil Aslam shared the news that the Pakistani Rupee has been the best performing currency for the first three months of 2021, against the US dollar.

PkR has been the World best currency against USD from January 1st to March 31st. It’s good to celebrate but equally concern to maintain the competitiveness. I’m on for gradual changes than abrupt. @StateBank_Pak

Tahir Abbas, Head of research Arif habib limited, while talking to The Express Tribune said,
“The rupee may peak somewhere between Rs150 and Rs152 against the dollar under the current cycle of gains. It seems it will remain stable between Rs152 and Rs155 by the end of June 2021,”
Pakistani ruppee is also one of the four world currencies that have posted gains versus the greenback together with the Canadian dollar, British Pound, Saudi Riyal, and the Norwegian Krone.

Pakistanis sending money in Roshan Digital Accounts (RDAs) has increased local currency demand, which led to appreciation of the currency.

FDI in a new scheme under Naya Pakistan certificate, gives higher interest rates than those offered in international financial institutions. That also led to stability of ruppee.

Another factor is reduction in Hawala and Hundi. This is because of the restriction in air travel to GCC countries like Saudi Arabia and UAE, which led in transfer of remittances through banking channels instead of sending them through people visiting pakistan from abroad.

If all of these factors keep contributing to the economy, the Pakistani Rupee is poised to remain stable Inshaa Allah.
Read more at: Rupee becomes world’s best currency