Pakistanis all set to rename Islamabad to Islamagood. Already 300 people have signed the petition! 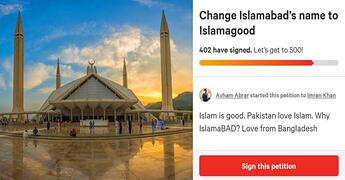 Islamabad, the federal capital of Pakistan is to be renamed. Someone initiated an online petition to alter the name of Islamabad, from Islamabad to “Islamagood”. Reports assert that this petition has already obtained more than 300 signatures. The petition was posted on an online website, Change.org.
The petition was created by a Canada-based Bangladeshi national named Ayham Abrar and was directed to the Pakistani PM Imran Khan. According to him, “Islam is good. Pakistan loves Islam. Why Islamabad? Love from Bangladesh The petition started about 7 months ago, it reaped a lot of attention on social media in the past few days. Many people posted online that the petition was absurd. The name Islamabad clearly means the “City of Islam”. The name Islamabad is made of two Urdu words, Islam and Abad. Islam is the name of the religion, while “Abad” can be understood as a location.

He didn’t even know the meaning

Idk this was funny😂

No ig Islamabad is nice

it is xD If only they knew urdu

Like seriously. I think Islamabad is perfectly fine but it’s my opinion I can’t impose on any one

Most of the people have the same opinion.