Earth, revered as a blue planet, is believed to be the only planet in the entire solar system that constitutes life. This intriguing feature of life that our earth is capable of and what makes it unique and distinct from rest of its counter-parts- i.e other planets- is ascribed to its endowment of water reserves. Hence it is water that makes life possible here and act as its building block. Pakistan virtually being a small mini planet as it has been inhabiting and supporting lives of approximately 200 million cohorts of people having varying lifestyles, ambitions, demographics, languages and races now appears to be on the verge of losing its life fostering status as it is being stranded and terribly mired in a tortuous tangle of water crisis. While myriad of reasons ranging from internal to external and then environmental have been cited which are deemed to bring Pakistan’s water reserves from a state of once efficient to the dire state of alarmingly deficient levels, however an in-depth introspection of all these internal, external and environmental factors denude that they seem to have a common root or a symbiotic connection with multiple facets of National Unity.

Referring to a press released report crafted by World Bank contended “The availability of water in Pakistan since its independence has been reduced by 400% and it is expected to retrench further if immediate action is not taken for preserving existing water reservoirs”. The shrinkage of water at such pace has impaired almost every sector of the country as they have been heavily reliant upon it. This plight of water scarcity soon escalated in to crisis when it plunged down below the threshold limit of countries net water requirement.

As Pakistan’s political system has endured intermittent Military intervention, it is not able to reap the fruits of democracy that guarantees National Unity by strengthening and integrating its all federating units rather such occupation shattered its very foundation through excessive centralization and alienation of one or more federating units. The destabilization of democratic system and the imposition of dictatorial rules impeded any reform at policy, planning and implementation level that could have prevented water resources from the dead-end brink of crisis. The end result is the crisis of water that has now begun to threaten country’s national integrity as well as its energy, food and national security.

Pakistan being the fifth most populous country is now on its way to become the fourth most populated country of the world as its population has been rising at an annual rate of 2%. Whereas no other significant proactive and preventive arrangement has been undertaken by ruling elites to manage and oversee such massive influx of new comers in its social fabric, this population surge has aggravated the already neglected water sector by drawing more water from the depleting reservoirs besides crippling its natural recharge system. Due to the limited carrying capacity of the water reserves the country ended up in infringing its per capita availability of water to compensate the new comers. Moreover as no other water pricing mechanism and its effective regulatory and management system has been put in place to conserve and recycle the available water, this valuable reserve becomes wasted bringing pollution, diseases and disasters hence adding more problems to already swarming country’s problem cart. However this picture of gloom could have been the glimpse of opportunities if a holistic approach was adopted through building consensus, coordination and political will that would subsequently target the palpable and subtle factors will be presumed to be the primary causes of water crisis. Unfortunately no progress was able to make it possible owing to the lack of unanimity of national and provincial political elite at legislative and executive tiers that could have open the eyes of the bureaucratic and governance machinery from its deep slumbers and draw their immediate intervention to introduce, develop and enforce strategies that would have stymied water from teetering in to crisis through managing its abruptly grown population and advanced policy initiatives to curb water pollution and recycle water for its main water national grid alongside increasing its grid capacity to ensure its maximum storage for preventing any natural or foreign incurred disasters such as flood.

The International monetary fund has ranked Pakistan’s economy as one of the most water stressed economy of the world owing to its high water consumption per capita of GDP output. While Pakistan’s land constitutes vast proportion of arable land, its geographical location at the temperate zone makes that arable land arid or semi-arid land leaving it substantially dependent upon either monsoon rain system or irrigation channels that supplies water from natural river streams to the agricultural areas. Another bane of water crisis emanates from the deterioration or personified manipulation of the afore mentioned arrangement that not only will provide water to our system but is also meant to store, maintain and supply that water to their required destination producing the necessary agri-output to ensure our food security and support our economy. As Pakistan agricultural research council in its research gazette highlighted Pakistan’s agriculture sector potential which not only contributes 22% of its net GDP and but also accommodates 41% of its human resource (labour force) besides leveraging a lion’s share in its total exports, yet it further lamented the global environmental changes as evident in our changing monsoon pattern and increasing frequency and intensification of climatic events reflected in the form of drought, flood and hurricanes in conjunction with our resultant failure to reinforce policies of adaptation and mitigation strategies have severely affected the entire agriculture sector as our outdated water infrastructure and management system is not capable enough to adjust itself with the encompassing changes. This dismal situation has added future dimensions to water crisis when state adopted indifferent attitude and did not launch any substantial corrective measures that could have attenuated the twilight situation and strengthened its system capacity to increase its water security against the backdrop of these vagaries.

The element of national unity is an undeniable factor that led to such state apathy towards water crisis as it was not able to muster sufficient political support and will from all the stakeholders involved ranging from political parties to civil society and landlords having stakes and interest in the given arrangement. The perpetual state of denial and political impasse strangulated much needed following substantive reforms such as overhauling the whole water regulatory managemental and institutional framework; Documenting and taxing agriculture sector; Incorporating internationally recognized adaptation and mitigation techniques to conserve water; Revamping the existing irrigation network by strengthening its enclosing embankments, dykes and increasing its channel capacity by removing accrued silt deposits; Introduction of spate irrigation techniques that store flood water as a backup to be used in dry season; and promoting crop per drop techniques that lowers water consumption, increase crop productivity and provide crop varieties which are not only resistant to heat shocks but also less prone to pest and weeds.

The renowned Diplomat Muneer Akram in his editorial once remarked that Asia is home to 60% percent of the world population and it generates 2/3 of the world output, it would be a centre of geopolitics and focal of power as Europe was 200 years ago. Moreover he predicted that as Asian development bank has regarded South Asia as the most water stressed region of the world, the world is more likely to witness conflicts among South Asian states in their quest for capturing maximum share of water from the floundering water reservoirs. 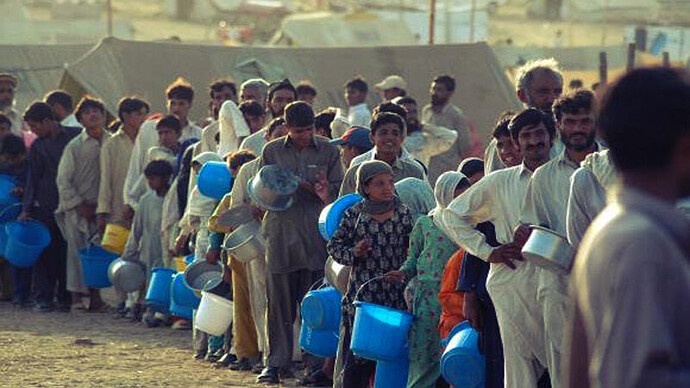