PDA on Campus - Celebration OR Derogation? 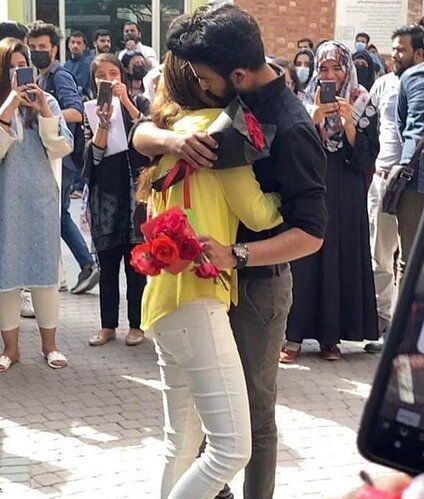 Few days back, a video of University of Lahore, in which a female student was going down on her knee and proposing a male student, went viral on social media. While several people praised the girl for this trend-setting novelty, quite a lot of public lashed out at them and began not only trolling them but also demanding strict action to be taken against the act. The video can be seen in the link provided:

Soon afterwards, the university expelled both of them saying that the two students “were involved in gross misconduct and violation of University rules”, adding that they were summoned before the committee but had “failed to appear”. "Furthermore, as per Section 16 […] they are debarred from entering the premises of University of Lahore and all its sub-campuses” were also the exact words of that letter.

As expected, the expulsion instilled mixed reaction from the masses. On one hand, people supported this step of the university administration calling it the lawful and Islamic thing to do. They called out the couple for open vulgarity and that youngsters like these are the reason why parents felt fearful to send their daughters for education. The other side of the coin showed even some celebrities expressing their views on the topic. 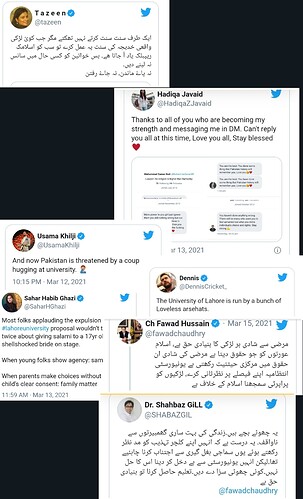 Cricketer Wasim Akram’s wife protested against this by adding to the tweet: “We just celebrated International women’s day and here we are with a top University expelling a young woman for having the confidence and empowerment to ask a man to marry her amongst the security of her peers. What kind of example are we setting here?”

Different users posted threads on the incident and called on people to let others be happy - they suggested that the university should have sent the students a second summons instead of expelling them without hearing their point of view; that many assault cases are not dealt as seriously as this unimportant issue was; that it is not okay to expel students merely because they hugged.

Hadiqa Javaid, the girl in the video, thanked the people who were encouraging her for this action. Recently, another video surfaced where the couple in limelight, Shehryar Ahmed Rana and Hadiqa were seemingly casually enjoying the fame which their proposal video was getting. The link to that video is as follows:

But afterwards, maybe when things became way too harsh, Shahryar posted an apology as can be seen in the screenshot and took all the responsibility upon himself while urging everyone not to defame the girl. 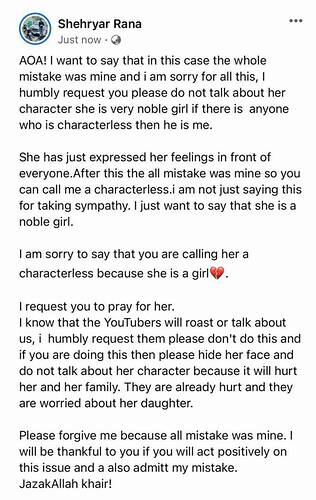 What is your take on this incident?

I totally agree with what wasim akram’s wife said, it’s so disappointing to hear that we are living in a country where people that are involved in child abusing and are so verbally open about as it can be seen in the given link https://youtu.be/NMp2wm0VMUs
But there is nothing to be done about that and when there two people who love each other and are being vocal about it in front of the whole world instead of hiding the truth, they are being so brutally attacked it’s just sick, okay completely support it as it seems to promote PDA at educational places but still what we are doing or what the university did is too much.

i already said that this is not the right way of Expressing,this is not our culture. remind those who thinks it is freedom of expressions.