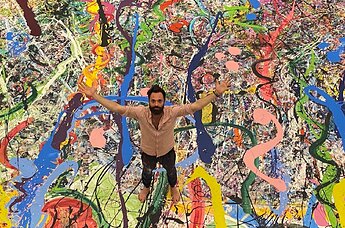 1025991600×1061 580 KB
The canvas painting known to be “The journey of Humanity” sells for 62 million dollars in Dubai, second most expensive painting sold at auction by a living artist.
The British artist “Sacha Jafri” holds the Guinness world record for the largest art canvas.
The utmost reason behind the art piece was, he was stuck in Dubai due to imposition of lockdown for Covid-19 and he came up with the concept for the work with themes of connection and isolation. He used 1,065 paint brushes and 6,300 litres of paint.He painted on large canvas of 17,000 sqft for seven months staying in Atlantis Hotel, Dubai. Then he aimed to make this painting, to raise funds for charity. The charities set to benefit include Unicef, Unesco, Global Gift Foundation, and Dubai Cares. The canvas was split into 70 lots of scale and were to be sold in 4 different auctions but, they were all bought together in one place and was displayed in a single aution by Andre Abdoune, a French national living in Dubai who has a cryptocurrency business.
Abdoune said he is planning a “second step” for the painting, hoping to raise even more money for charity, without giving further details. For now, he intends to leave the painting in Dubai.
Jafri said: “The purity of intention that only children have, did something really powerful”.
Sources: World’s Largest Painting Sells for $62 M. at Dubai Auction – ARTnews.com and Sacha Jafri reveals the backbreaking process of creating 'world's largest painting' that sold for $62m | The Art Newspaper
18 Likes
Swaiba_Sajid March 24, 2021, 4:36pm #2

stunned** I really want to eat paints seeing this painting​:joy:

Awesome i also want to become an artist😁

It seems a sheer waste of paint to me. But totally worth it if you get $62 million dollars for wasting thousands of liters of paint

Yupp it is how it is🙌 it’s the matter of choices🤷😊. It took him seven months to do it🥺 he probably have done much of hard work to accomplish it, it’s an artist’s love to play with colors. No offense you gave your opinion, I gave mine💕

Yeah…absolutely right! Artists love playing with clrs…no matter how much it costs to us, its joyful for us​:heart: