Apart from the rising street crimes i.e. looting people, stealing cash from the ATM machines has also been increased. Earlier this month, Unidentified robbers tried to the break the ATM machine in Civil Lines areas to steal the cash. For that, after spraying the CCTV camera installed in the ATM booth of a private bank they were failed and fled away. as the police reached the spot after being informed.

Recently, similar incident took place took place in Khayaban-e-Tanzeem of DHA’s Tauheed Commercial Area where a man identified as Rafiq Ahmed entered the ATM booth to steal cash from the automated teller machine. But he was caught red-handed by the police.

He can be seen in the CCTV footage taking out tools from his pocket to break the ATM. Without having any fear he made many attempts to pull out the cash tray but he was out of the frying pan, into the fire after then.

Here is the footage; 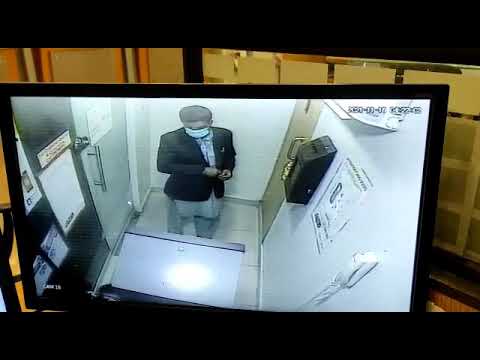 The Superintendent of Police (SP) Tawheed Memon while talking to media told that the man was completely unaware of the presence of the police officials outside the ATM booth. When he came to notice the policemen there, he made a failed attempt just to flee from the scene.
According to the police, the man was immediately arrested after he came out of the ATM booth.