Pakistan is a team that can defeat any team in the world. Today, in the very first match of the ICC Men’s T20 World Cup against the India, Pakistan outplayed India by 10 wickets. Men in green created history in the T20 World Cup for first ever win against India. 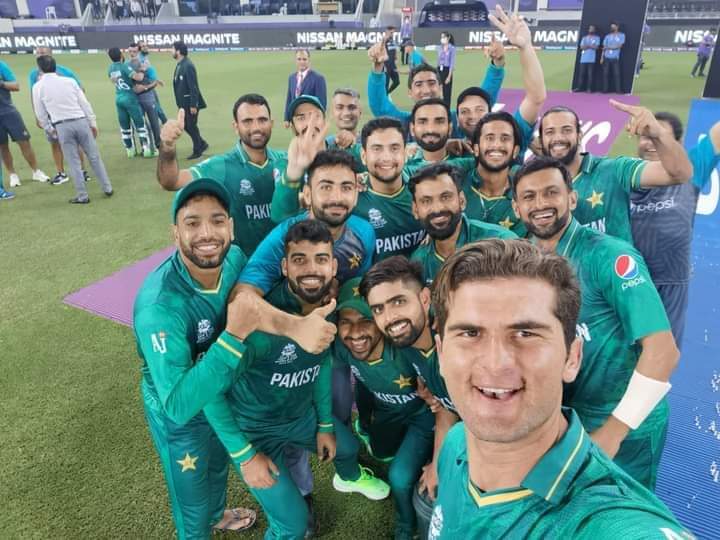 Pakistan won the toss and elected to bowl. Things weren’t good at all for India as they lost their first two main batsmen in the powerplay. Shaheen Shah Afridi was the man who took early break through and made India in trouble. Later on, with the captain innings of Indian skipper Virat Kohli who scored 57 runs of (49) ball sparked off India to reach at 152 with the lost of 7 wickets in 20 overs.

Pakistani openers with their masterclass batting and opening partnership, chase down the target in 17.5 overs and without losing a wicket. Mohammad Rizwan smashed 79 runs of just 55 balls and captain Babar Azam made 68 runs of 52 balls. This was the longest partnership by the Pakistani openers in ICC Men’s T20 World Cup. 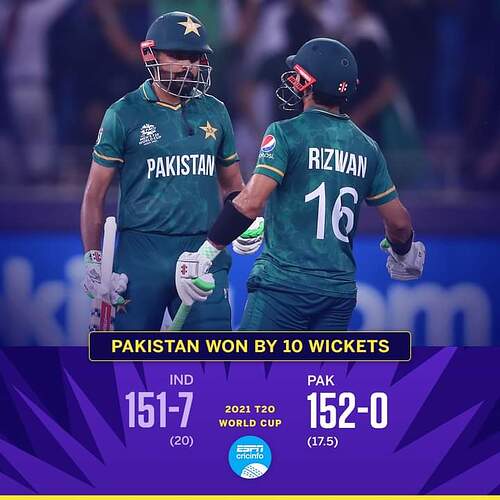 After the match, Babar said, “We executed our plans well and the early wickets were very helpful. Shaheen’s wickets gave us a lot of confidence and the spinners dominated as well.” 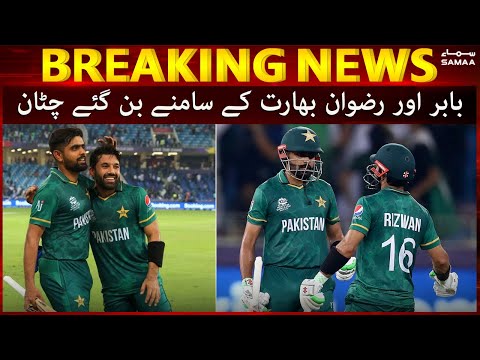 Shaheen Shah Afridi was the player of the match who shined with the bowl by picking up 3 wickets. He also become the first pacer to dismiss Virat Kohli in T20 World Cup. In addition to this, Virat Kohli in 2012 T20 World Cup, scored 78, in 2014 scored 36 and in 2018 scored 55 runs and remained not out.

“This is the first time we’ve beaten India and I feel proud,” Shaheen said after the match. “I knew it would be good for us if I got early wickets and that worked out.”

“We did not execute the things that we wanted to but credit is certainly due, they outplayed us today.” He further said, “When you lose three early it’s very difficult to come back, especially when you know the dew is coming.”

He also added that Pakistan’s bowlers did not let his team score enough runs.

“Nation is proud of you all”, he said.

@ImranKhanPTI
Congratulations to the Pakistan Team & esp to Babar Azam who led from the front, as well as to the brilliant performances of Rizwan & Shaheen Afridi. The nation is proud of you all.

Apart from that, there has been a thunderstorm of memes on social media after the match. Virat Kohli’s congratulating gesture to Mohammad Rizwan has also taken the internet by storm. But it was the loveliest moment ever. 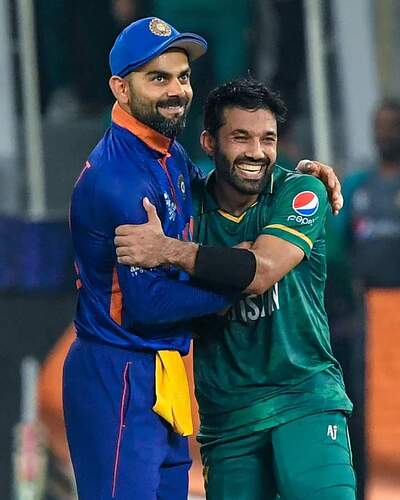 Some of the interesting and hilarious memes are: 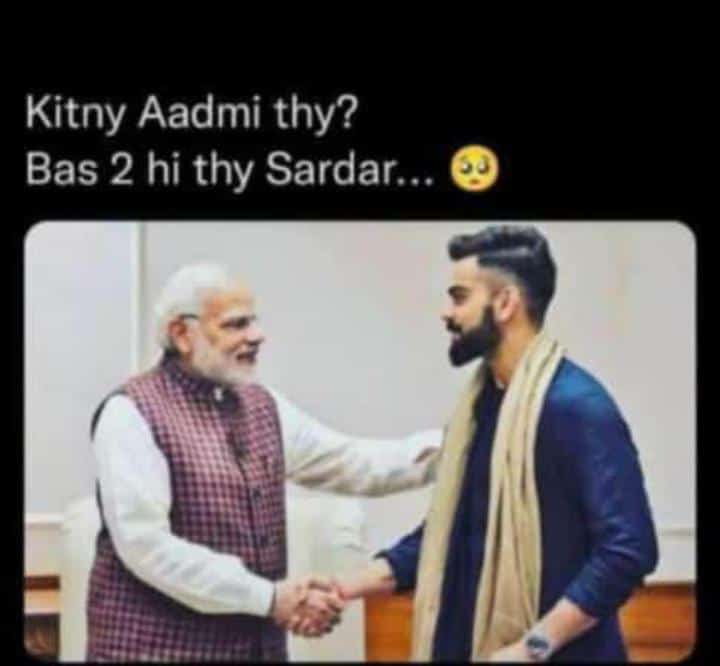 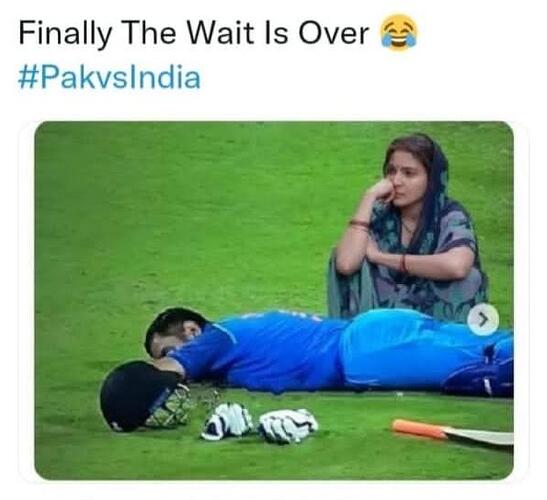 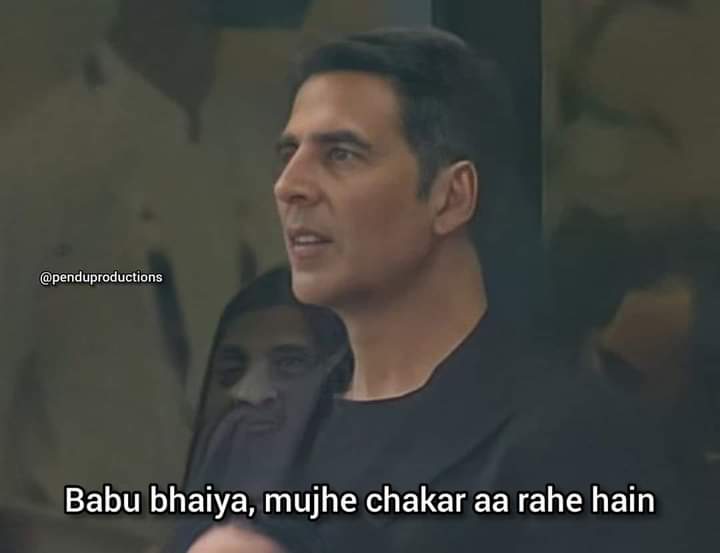 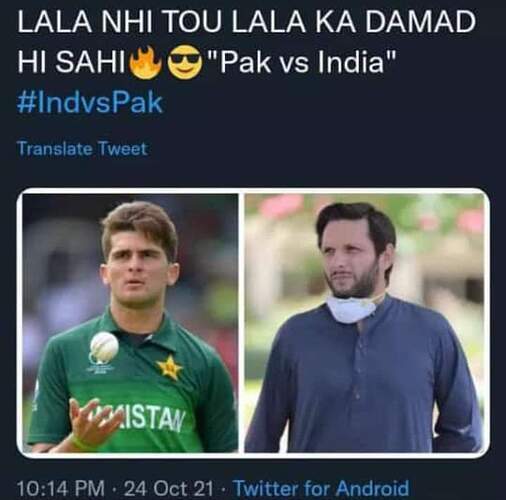 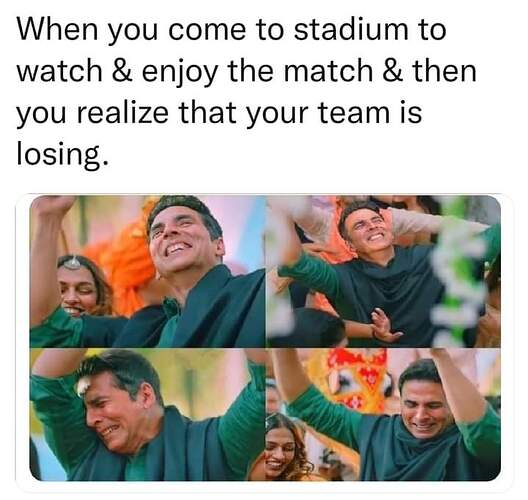 To conclude, Pakistan cricket was at its best today. Bowling, fielding and batting each of the three was fantastic. Let’s all celebrate the victory of Pakistan and pray that Pakistan should keep this momentum ahead for the upcoming matches.

What’s your take on it? Let us know in comments section below.