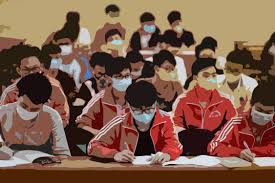 On the recommendation of the National Command and Operations Centre (NCOC), the federal government had closed educational institutions from November 26, 2020 to January 10, 2021.

The upcoming meeting of education ministers is expected to consider reopening of educational institutions in three phases, Daily Jang reported on Saturday.

As per the plan, schools were to reopen on January 11. But the continuing spiral of the coronavirus cases across the country has put the decision under serious doubt with federal and provincial education ministers asserting that it was “unlikely” educational institutions would be allowed to reopen.

The topic would be reconsidered at a meeting of the education ministers, presided by Federal Education Minister Shafqat Mahmood, on January 4 to discuss the national education policy. The final decision, however, would be taken after advice from the health ministry on the matter.

Jang reported on Saturday that the education ministers would put forth the suggestion of reopening educational institutions in phases. In the first phase, the primary level students would go back to schools on January 25. The second phase would allow middle schools to reopen by February 4 and the higher education institutions would start their functioning by February 15 in the third phase.

The publication also noted that it has been proposed to delay school and board examinations till last week of May or early June. The new academic year would begin in August and summer vacations would be shortened.

It is worth noting that education is a provincial matter, under the 18th Amendment. However, the provinces adopted Centre’s policy owing to a Supreme Court ruling directing for a uniformed policy across the country to tackle the coronavirus pandemic.

The private schools associations have, however, opposed the decision of keeping schools shut.

On Thursday, a private school council demanded the government to reopen schools on January 11 as per the plan and also asked for an economic relief package. It demanded that the government should suspend the registration fee and taxes for a year.